The Best Monitors For Graphic Design in 2022 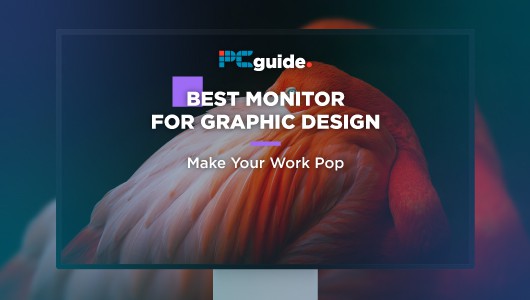 The idea of graphic design is communicating to a chosen audience through the majesty of visual media. The Egyptians kicked off this idea by having pictures of animals and symbols expressing what the artist wanted to say, think of them investing logos. Whilst humanity has moved away from tomb walls and parchment, shopping for a suitable monitor for graphic designers has always been tricky, and often expensive. Unlike gaming monitors where refresh/response rates are key, resolution, screen size and a decent colour gamut take priority. In today’s market, 4K is quickly becoming the standard for most, zooming in on the finer details relies on high pixel counts, with 6K and 8K monitors being the ideal candidate.

When it comes to screen size, 27” is probably the lowest you’d want to go in order to not only get the best out of your screen resolution but certainly for anyone doing anything outside of hobby graphic design work. The more visual workspace the better with pros normally opting for anything up to 40”. 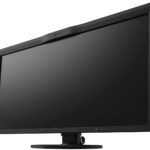 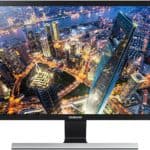 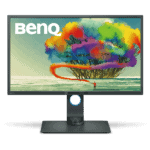 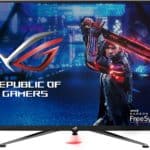 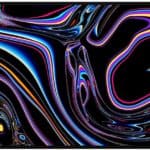 As previously mentioned, color gamut, or colour accuracy, is key. Lower end monitors will jump from washed-out panels to high contrast. This is no good for anyone that depends on specific colour palettes when designing anything of importance, and in the long run, will cost you. Having a versatile best monitor for graphic design with plenty of settings and a strong representation of the Adobe RGB color space will pay off every time guaranteed.

Connectivity isn’t too much of an issue these days, with most monitors supporting display port and HDMI input alongside converter products coming down in value significantly. With that being said, always ensure your monitor will have the right amount and types of connections you need. Whilst most monitors don’t suffer from connectivity issues, your budget will have to be a big one for the right monitor. Investing in yourself or your business is key when making it as a graphic designer, the standard $100 office monitor simply won’t cut it here.

How We Chose The Best Monitors For Graphic Design

With all of the above factors in mind, we wanted to make sure our choices were inclusive of budget and most levels of the graphic design profession. Early learners probably won’t appreciate or have the budget to splash out $5999 on an Apple Pro Display for example. Also, depending on your specialization, there might not be a need to spends thousands on the perfect display. Just the right one to suit your needs. With that in mind, here’s a selection of our best monitors for graphic design with you in mind:

The Best Monitors For Graphic Design in 2022

Eizo is a brand with a pedigree amongst graphic designers, and the CG319X proves why along with a hefty price tag. It’s equipped to handle anything from 2D tasks to heavy 3D CGI and visual effects thanks to its 32” LCD 4K DCI panel with a contrast ratio of 1500:1 and brightness of 350 cd/m2. This ensures the right white/black balance whilst given users enough wiggle room when it comes to brightness settings.

This is also the best monitor to use alongside Adobe products with its 99% Adobe RGB. Colors will be as lifelike as currently possible thanks to how agile this monitor is thanks to its support for CMYK, a color space championed by print graphic designers. If you can stomach the price tag, this is the best monitor for graphic designers who use display ports and HDMI. Graphic designers produce the visual media that businesses use to train their employees, market to customers, and brand their business. If you are a creative individual with a talent for visual elements then this monitor will not let you down.

When it comes to affordability, nothing really comes close to Samsung U28E590D. Its 28” 4K panel will give you every bit of detail you need when starting out or when taking on most intermediate projects. Usually, monitors in this price bracket don’t come with this kind of screen and are aimed at high refresh rates, although bear in mind this monitor also functions at 60Hz with a 1ms refresh rate.

It really is a great deal, but it might be an idea to mount this panel on a suitable VESA arm or mount as the stock stand is flimsy. Alongside its poor viewing angles, having a movable VESA mount will soon solve both of these issues, enabling you to get on with that important project with no worries about sacrificing detail. As new businesses start up and more and more commerce becomes dependent on the Internet, graphic designers will play an increasingly crucial role in commerce. This entry-level graphic design monitor will set you up on the right path, just be prepared to invest in an upgrade when things really start to pick up.

Next up is what we feel is the best value for money monitor for graphic designers. It supports the most in-demand color gamuts, most notably Adobe which will put out true color depictions on a  32” 4K panel that really does pop. Its three display modes ensure true blacks instead of the dark greys we’re used to seeing with most monitors.

BenQ has positioned this monitor as a no-frills option for graphics designers, cramming in specifications that graphic designers need without the bells, whistles, and overinflated pricing like other named brands. It’s also a great choice for animators and web designers given the animation mode and ability to tilt 90 degrees for text-heavy tasks. If you’re looking at going into the graphic design industry full time, either employed or freelance, most employers and clients are more interested in what you can do as a designer. This is a great mid-range graphic designer monitor that will really help hone your skills, which in this day and age can weigh more than a degree.

Yes, we know this is primarily a gaming monitor, but hear us out. Gaming monitors won’t be found knocking on the doors of Adobe color gamuts for the most part, but they have massive headroom when it comes to displaying crisp and smooth graphics from the most demanding of games and their respective rigs. Granted, 42” worth of 4K monitor is probably a bit on the overkill side, but for graphic designers who love to game, it’s a perfect proposition.

It does sport a wide color spectrum alongside decent brightness and contrast options. Packing all this into an anti-glare monitor is a great deal for any hybrid user. It even comes with a remote for versatility. Who says you can’t plug in your Xbox Series X into your graphic design monitor anyway? Large corporations will pay substantial sums of money for logos and brochures from graphic designers. It’s often more cost-effective than hiring a full-time in-house designer. The changes are you’ll end up working from home, in which case it’s always nice to have a monitor that can multi-task.

The Apple Pro Display is a powerhouse and the first of its kind, a 32” 6K display. If you’re part of the Apple ecosystem, this one is a no-brainer, although its Thunderbolt and USB 3.0 loyalty vs. lack of display port and HDMI could be overridden with an HDMI or DP adapter for peanuts.  Its P3 wide color gamut will cover every graphic designer’s want and need, providing this alongside their XDR (Extreme Dynamic Range) capabilities in one powerhouse panel. Sir Jonathan Ive became world-famous for his work on the iPad and other popular Apple products. In fact, graphic designers have produced many of the most important landmarks in visual media over the last century. There are not many graphic designer monitors that can complete with the Apple Pro Display XDR.

The golden ratio never looked more at home on a best graphic designer monitor before now, but there’s a couple of shady downsides to this amazing panel. Apple being Apple, the price tag doesn’t include a stand or VESA mount adaptor, which is very disappointing to see on such a high ticket item. If you can afford the extra to buy one, this is the best monitor for Mac graphic designs hands down.

When it comes to the best monitors for graphic design, we’re talking high budgets and workstation setups worth thousands of dollars. It’s not something that can be done cheap. As previously stated, it’s important to invest in yourself and your company with equipment that will compliment your work for the long run. We’ve included some lower-end products which is a great start, but ultimately the higher ticket products win out every time.

What does colour gamut mean?

A Colour gamut is the full range of colours visible to the human eye. But what is a colour gamut in displays? Since most displays are limited in the colours that they can produce, each device will also follow one or more colour standards that define its specific colour gamut. Though there are a surprising number of different colour gamuts available, there is probably one that best suits your needs.

Nits is a unit that measures brightness in terms of area, or in technical terms, candela (a standard unit of light equivalent to the light produced by a single candle) per square meter.

Eizo ColorEdge CG319X is the perfect choice for any graphics designer Mac, PC or Linux. It has all the ports, specifications and features necessary to accommodate graphic designers to special effects animators. A close second would be the Apple Pro Display, however, it’s not very consumer-friendly to not include necessary equipment such as stands with a $5K product. Are you happy now Mr. Cook?