Elon Musk, the closest thing this universe has to Tony Stark, apparently attempted to sell his clean energy/electric car company Tesla to Apple chief executive Tim Cook due to financial issues back in 2016. There was one condition however, Musk wanted to become Apple’s CEO.

Tim Higgins of Wall Street Journal quotes the following in his book “Power Play: Tesla, Elon Musk, and the Bet of the Century”:

“Apple Chief Executive Tim Cook and Tesla Chief Executive Elon Musk are talking on the phone. The 2016 unveiling of the make-it-or-break-it Model 3 is coming soon, but Tesla is in serious financial trouble. Cook has an idea: Apple buys Tesla.

Sure, says Cook. When Apple bought Beats in 2014, it kept on the founders, Jimmy Iovine and Dr. Dre.

BBC’s James Clayton recently took to the twitter verse to confirm if this actually happened amidst reports of Tim Cook denying the conversation ever took place, with Musk also stating he never had the sit down with Cook and that Tesla was worth around 6% of today’s value: 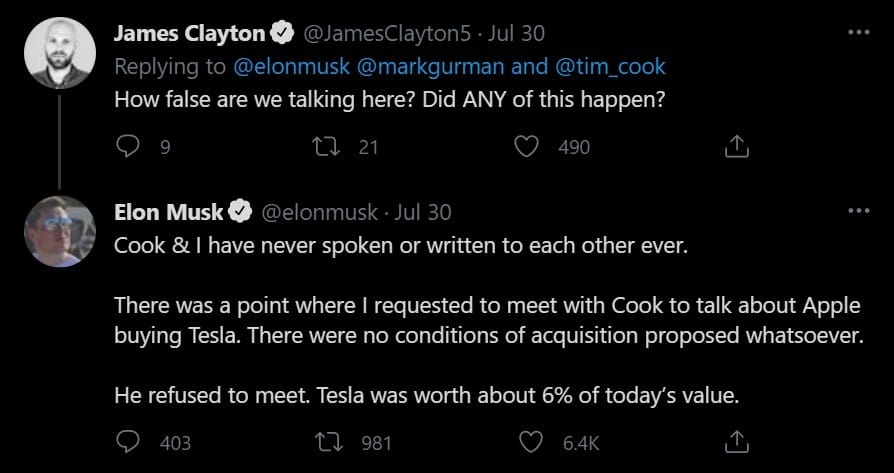 The deal never happening, or being discussed for that matter, is probably for the best. Never one to shy away from bold statements, Musk also recently took to Twitter to chime in on the 30% Apple app store developer charge, of which Epic Games is currently tackling:

As WCCFTech reports, Epic Games found a way to circumvent such charges on Google Play and Apple App Stores, resulting in their apps, such as Fortnite, being pulled from storefronts in all regions. It may look like on the surface that Elon Musk might be a little bit sore following the blanked Tesla pitch five years ago, but our bet is on Musk smiling in his bathtub full of freshly pressed $100 bills.