by Jacob Woodward
in Reviews

When you think of video editing, ensuring that you have a decent amount of RAM and a powerful CPU are the first things that come to mind. However, having a powerful graphics card will not only boost your performance but give you the opportunity to really make your videos/films shine. Many graphical elements such as special effects and motion graphics even require a top tier graphics card to even work, making it even more essential when working in high resolutions like 4k. With this list of best graphics cards for video editing, we’ve tried to give an option for all. Whether you want a top of the line graphics card for intense 4k video editing or a more budget friendly 1080p option, you should be able to pick one for you.

With the price tag of the Nvidia RTX 2080 Ti, you’re going to be wanting some top of the line performance when video editing. Thankfully, this graphics card delivers. The EVGA variant of the 2080 Ti we’ve chosen here is probably the one to go for, especially for those wanting a more than capable 4k option. It offers up stellar build quality, optimal fan cooling and the all new EVGA Precision X1 software. Looking at the specs of this graphics card, you’re going to be getting a 1,755 MHz boost clock speed as well as 11GB of DDR6 SDRAM perfect for editing and rendering 4k video footage. As well as great specs, with this being a Nvidia GPU, you can utilize Real-Time Ray Tracing, NVIDIA® GeForce Experience, NVIDIA® Ansel, NVIDIA® Highlights and NVIDIA® G-SYNC Compatibility, which can provide you with that slight boost when editing large amounts of 4k footage. With this graphics card being as powerful as it is, it does require a lot of power. So, when either upgrading your current rig or building a new PC, ensure you have a gold rated, high wattage supply to give your components enough juice. After all these positives you might be thinking if there is anything actually wrong with this graphics card and the answer comes when you look at the price. It is a very expensive choice and that’s why we’ve classed it as the best graphics card for 4k video editing and not the best overall. 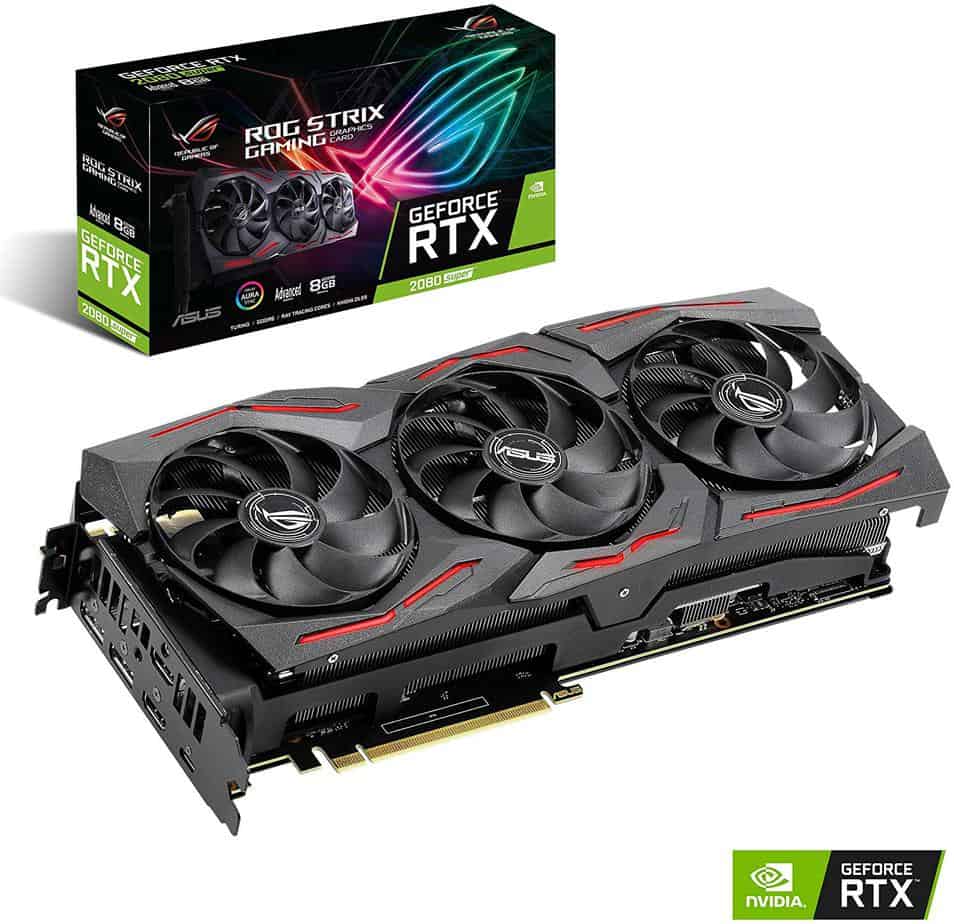 The 2080 Super is almost the 2080 Ti’s baby brother, providing you with a little less punch but at a much lower cost. You’ll still be getting enough performance to keep up with 4k footage but utilizing a large amount of fancy effects may push it to its limits. Looking at the internals of this thing, there’s 3072 CUDA cores, a boost clock of 1,860 MHz, and 8GB of DDR6 SDRAM which all come together to make a quality piece of kit. In conjunction, due to the ASUS nature of our selection here, you’ll also be taking advantage of FanConnect II and MaxContact technology, monitoring temperatures to ensure optimum levels and improved thermal transfer. The 8GB of RAM is 3GB less than the 2080 Ti, but for the price reduction, it really shouldn’t put anyone off. Speaking of price reduction, you can pick up this ASUS ROG Strix GeForce RTX 2080 Super graphics card for around $500 less than the 2080 Ti which in our minds tips the scales, cementing its place as the best graphics card for video editing, especially 4k footage. 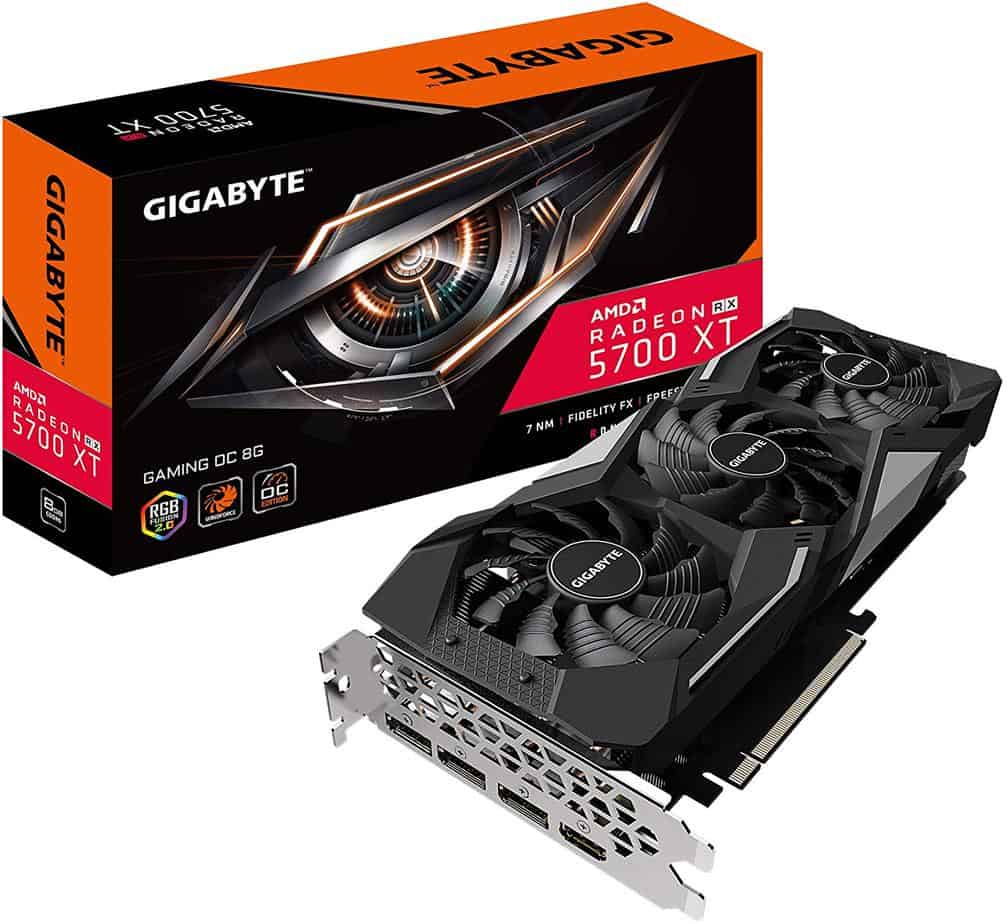 As with our best graphics card for 4k gaming piece, we have similarly included an AMD option for those who can’t bring themselves to part ways with trusty Radeon technology. As stated in that article, AMD graphics cards in this price range really struggle to keep up with their Nvidia counterparts but there are a few exceptions including the Radeon VII and the RX 5700 XT we’ve chosen here. The Gigabyte Radeon Rx 5700 Xt Gaming OC while this graphics card provides extra performance for gaming, it also translates over to video editing. You will be able to edit 1080p video with ease but 4k might be a bit of a stretch. Taking a dive into the specs, we can see it utilizing 7nm Radeon rdna architecture and Radeon image sharpening for crisp display. Additionally, with the inclusion of 3 Windforce alternate spinning fans and 5 direct touch copper heatpipes, your card will be greatly cooled when under intense stress. Overall this card will be more than sufficient to keep up with 1080p video editing with some motion graphics but selecting our next choice, the Nvidia 1660 Ti, will provide you with optimal performance. 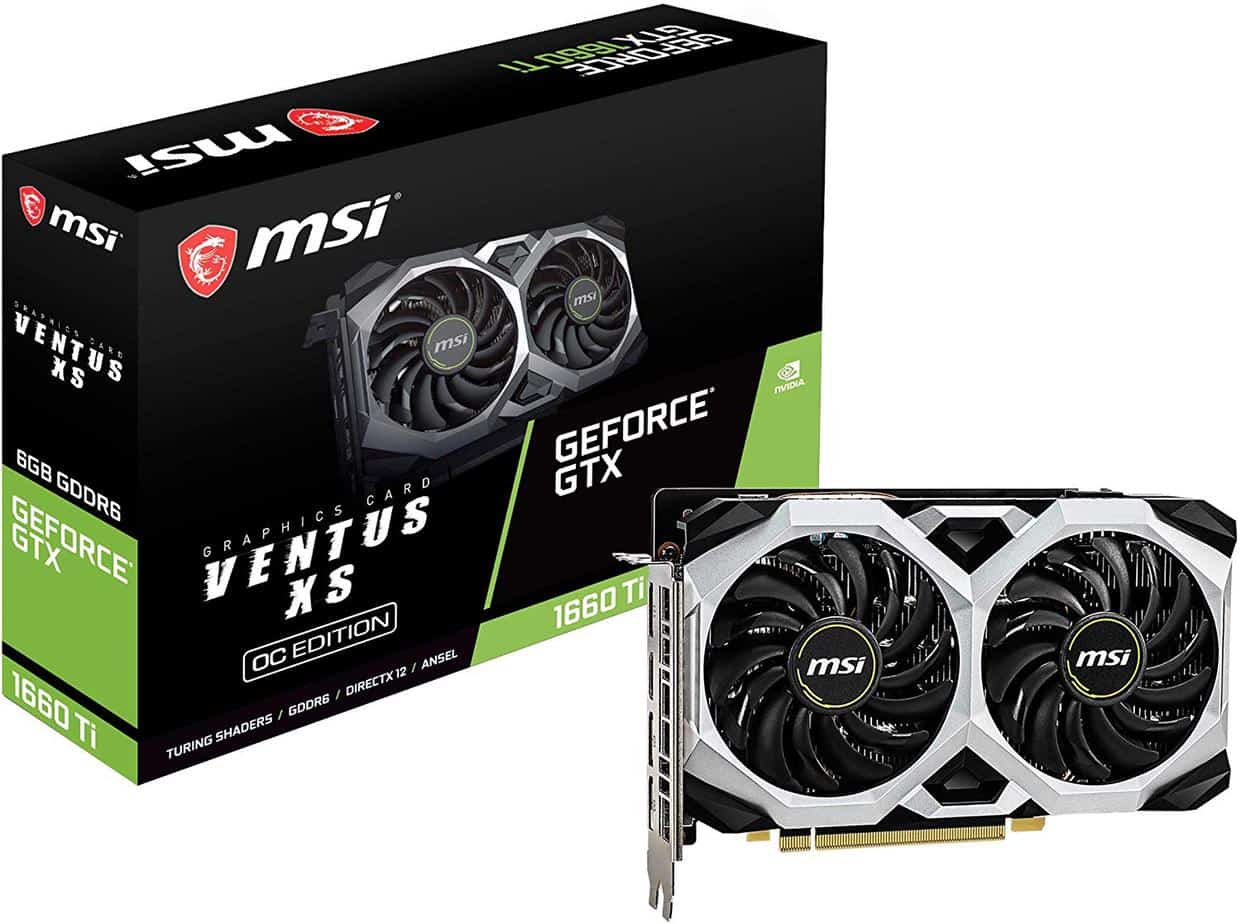 The MSI Gaming GeForce GTX 1660 Ti gives you a great bang for your buck. Not only does it give you enough power to cope with 1080p video with an abundance of effects, but can also cope with limited 4k footage. Under the hood of this graphics card is a core clock of 1770 MHz with boostability of up to 1830 MHz, coupled with 6GB of GDDR6 RAM, more than enough for most users. For those looking for a little bit of extra oomph, you could go for a RTX 2060 but it’s around 20% more expensive, hence why we think the 1660 Ti is the better overall option. Due to MSI manufacturing this card you’ll also benefit from some great cooling. The TORX 2.0 fans use a steep curved blade design, accelerating the airflow through and out the graphics card, keeping it ice cold. In conjunction with MSI, because this is another top Nvidia card, can reap the benefits of their technology, ensuring increased performance over our AMD pick; the RX 5700 XT. 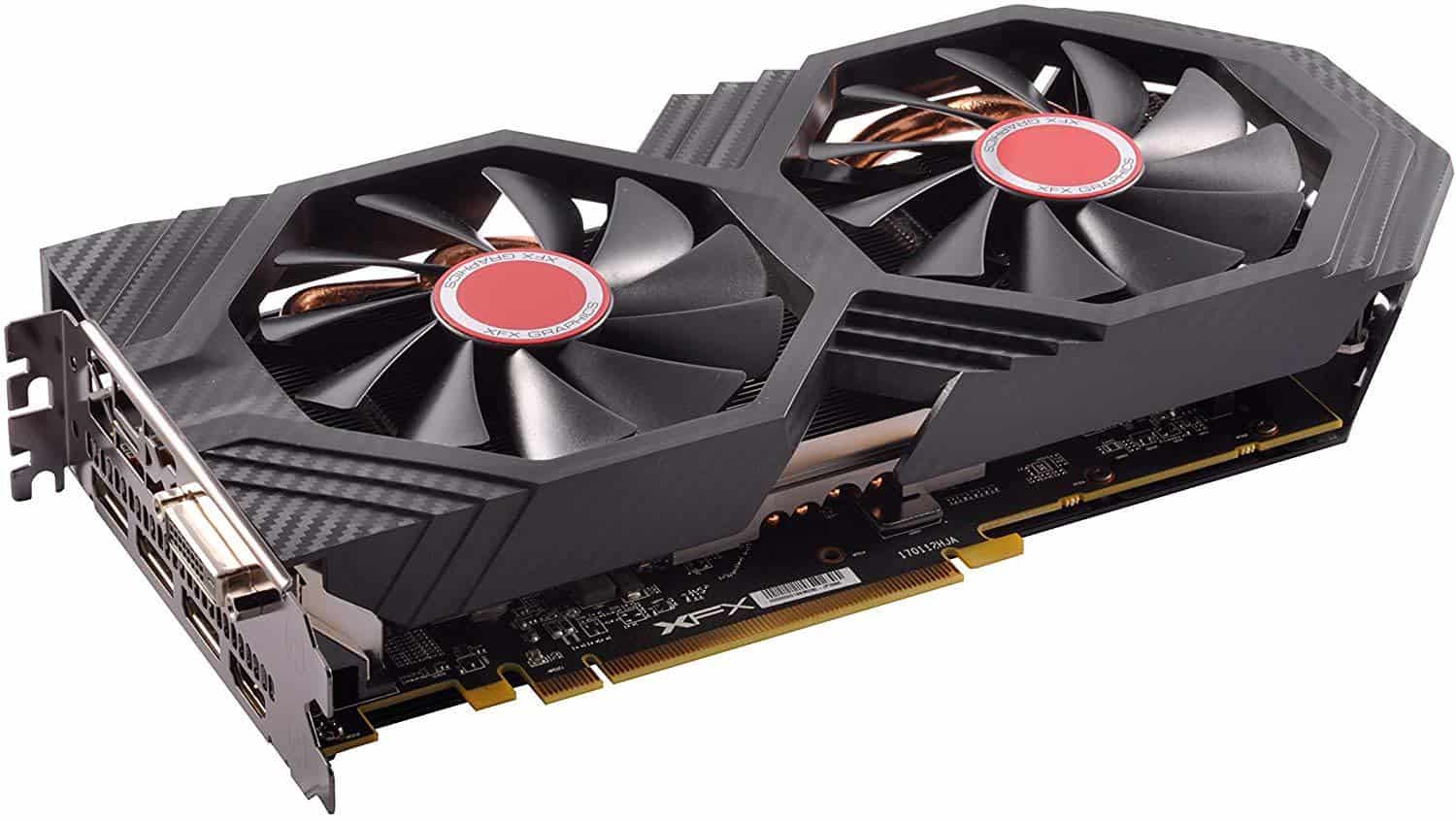 Choosing the right graphics card for video editing is always tricky but hopefully with the options we have listed above, you can come to a conclusion. If you’re hoping to edit 4k video with ease, of course the 2080 Ti and 2080 Super are the way to go. However, deciding between these two is where the deliberations occur. If you’re all about fancy effects and motion graphics, it might be worth shelling out the extra cash for the 2080 Ti to ensure your rig is full capable. On the other hand, if you are just using a lesser amount of said graphics, the 2080 Super is more than sufficient while saving you money in the process.

When choosing the best graphics card for video editing, there are a number of different factors to take into account. If you didn’t understand any of the specifications given in the article above, or you just want a refresher on what they all mean, we’ve provided this section as a buying guide for your reference. Keep reading for a breakdown on each of the key specs we’ve provided, and what they mean to you as a consumer.

GPU Size refers to two different measurements. There’s length, in exact millimeters, and width, measured in slots. Slots refers to both the PCI Express slots that a GPU is inserted into and the slots in the chassis, while length refers to how far into the case the graphics card extends.

Of these two measurements, GPU length is the one that is more likely to cause compatibility issues, especially in a Micro ATX or Mini ITX PC build. Width is really only ever a concern if you plan on installing additional expansion cards, which has become much less necessary with improvements in motherboard I/O and USB adoption.

In any case, be sure to check GPU clearance measurements against those provided by the case manufacturer in specs. You wouldn’t want to buy a massive graphics card that you find out doesn’t fit on the day you’re assembling your build!

GPU architecture refers to the technology your GPU is built around. Every card in a certain GPU series will be built with the same architecture, starting with a “pure” version at the highest end. Understanding these will help you better understand the graphics card hierarchy.

Below, we’ve listed the relevant GPU architectures for consumers today:

A reference design of a graphics card is one released by the manufacturer as a baseline for others to work with. Nvidia and AMD both release reference designs, which are then iterated upon by companies like MSI and EVGA.

These new designs use aftermarket coolers and may even result in shorter or longer cards, as well as higher out-of-box clock speeds. When a card ships with an above-reference clock speed, this is referred to as a factory overclock, and you will find it is very common in the GPU market.

VRAM refers to the memory used exclusively by your graphics card. This differs from standard memory, or RAM, used by the rest of your PC in a few key ways.

VRAM is mainly used for dealing with high resolutions, post-processing effects, and high-fidelity texture streaming. The more VRAM you have, the better your card will be at handling these things… as long as your card can keep up. The type of VRAM used can also be an influencing factor here.

VRAM types, from slowest to fastest:

In general, if you see two versions of the same card and one version has more VRAM go with that version. It’ll futureproof your system just a little bit more.

When we talk about how each GPU performs, we’ll be mainly referring to its resolution and FPS, or framerate. Below, we’ll provide some explanation for common figures.

Additionally, note that the FPS you can actually see is limited by your display. Most displays only display up to 60 Hz, or 60 FPS. The same applies to resolution, though this is measured the same by games and displays.