In this article, we’re going to go over our top 4 picks for best GTX 1660 Super. Nvidia’s latest budget GPU release acts as rather potent combination against both AMD cards in the same price range and its own 1660 Ti and non-Super 1660 cards. Once we’ve gone over our top picks, we’ll tackle the GTX 1660 Super itself and discuss how it performs and compares to its competition. 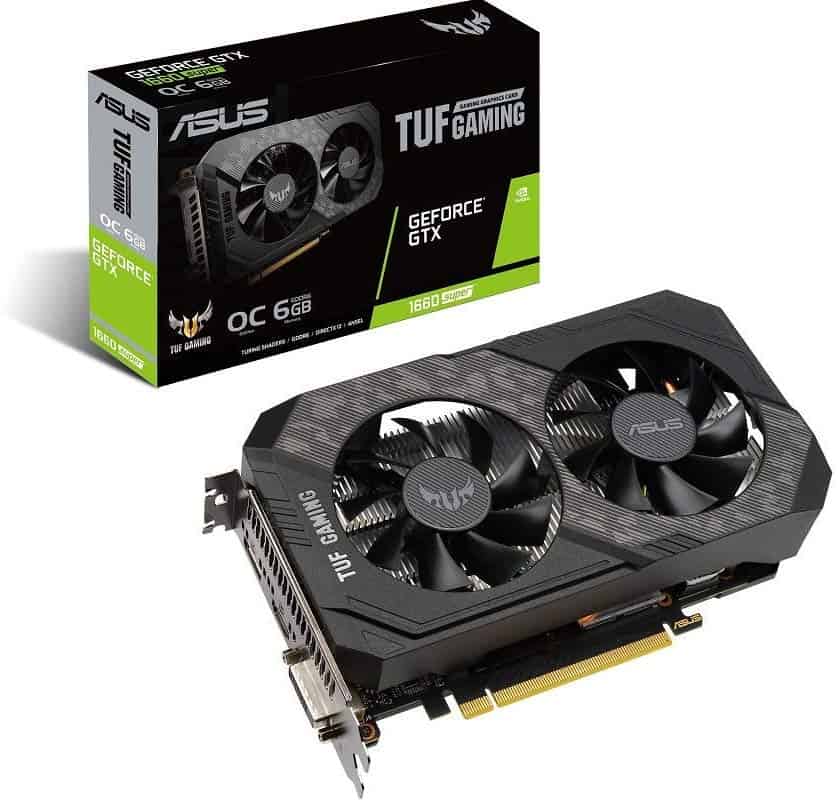 The ASUS TUF Gaming OC is our pick for cheapest GTX 1660 Super, but that isn’t the only reason we picked it. In addition to the low price, it boasts a surprisingly beefy cooler, a respectably short length, and one of the better factory overclocks on this list.

If you just want a GTX 1660 Super for cheap and don’t care about any extra frills or features, then the ASUS TUF Gaming OC GTX 1660 Super is an ideal pick for you. If you’re a bit more discerning, though, feel free to take a look at our other options. 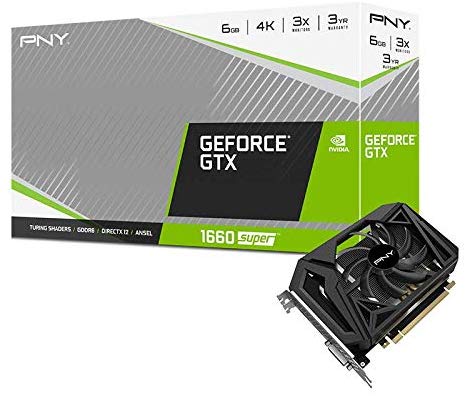 The PNY Single Fan GTX 1660 Super caught our size because...

Fortunately, being tiny isn’t all this PNY card is good for. Despite its small size, it performs on par with most other GTX 1660 Supers on the market, in terms of both raw performance and cooling. While you aren’t going to be able to push much overclocks on this one (especially since it’s restricted to PCI power), it’s a perfect fit for any low-profile HTPC or Mini ITX build. 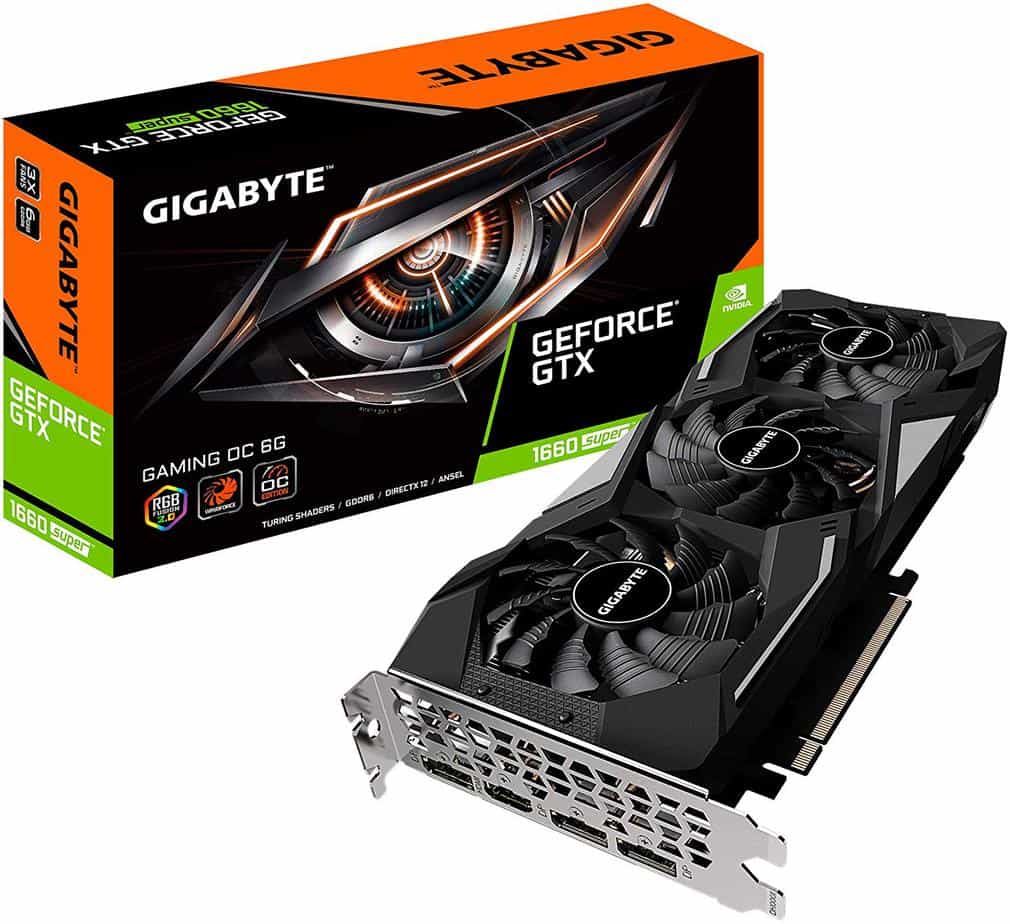 The Gigabyte Windforce GTX 1660 Super is our main performance pick.

It offers the best cooling and the best factory overclock. If all you care about is raw performance, this is the GTX 1660 Super for you.

...as long as it can fit inside your system. It’s the longest 1660 Super by a considerable margin, coming in at a whopping 280 mm. That great cooling requires a large cooler, and three fans to power it, so this is an acceptable trade-off to us. Just make sure it fits in your system before buying it! 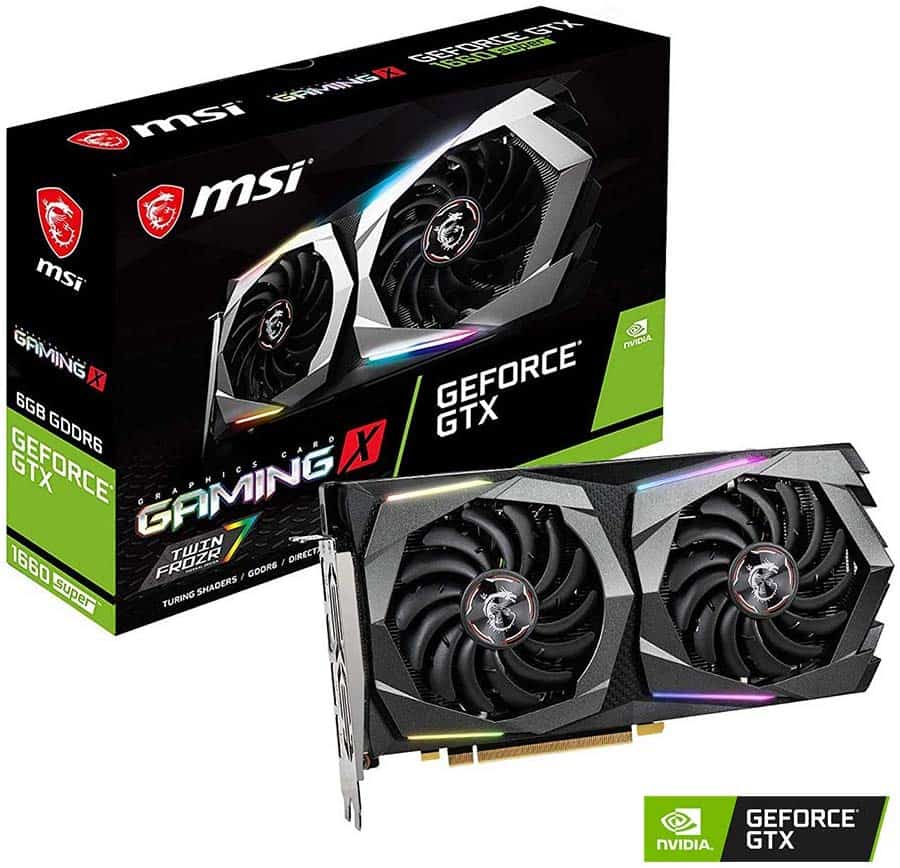 This is a good “middle of the road” card, with some extras. It doesn’t offer the smallest size, best cooling, or best factory overclock, but it still does pretty good in all of those areas. It’s an average-sized graphics card with a fairly good factory overclock, and it has some nice RGB.

The only real downside that comes to mind for us is the price tag, which is quite a bit higher than other GTX 1660 Supers. But if RGB is a must-have in a graphics card for you, this is pretty much your best option in this price range.

Buying The Best GTX 1660 Super For You

In this section, we’re going to go over compatibility concerns and information that applies to all 1660 Super cards, like basic performance expectations. By the end of this section, you should be ready to make a choice, even if you’re a total novice.

How does this card perform in games?

Expect this card to push 100+ FPS at 1080p and High-to-Max settings in all but the most intensive modern games. At 1440p, the same frames can be achieved with Medium-to-High settings, and 1800p should be able to push 60+ FPS at medium-to-high settings as well. Native 4K will certainly not be able to maintain 60 FPS at high or max settings, so we recommend scaling from 1800p and lowering other settings in order to achieve a comfortably smooth frame rate.

Aside from heavier modern games, lightweight eSports titles (like CS:GO, Dota 2, League of Legends, etc) should be much easier to push into sky-high FPS ranges. If you’re on a 1080p or 1440p 144 Hz monitor, pushing games like that to their maximum frame rates is well within range of this graphics card, so long as your CPU can keep up!

We’ve linked some max-settings benchmarks below for you to peruse as well, if you want more specific and less general information.

How does it compare to the competition?

The GTX 1660 Super competes with the RX 5500 XT and RX 5600 XT, and falls between the two in pricing. In the case of the 5500 XT, it’s a bit of a one-sided stomp- it boasts 20-30% performance improvements, depending on the game. It does come with a $40 higher price tag at the time of writing, but that’s money well worth it for the extra performance.

Compared to the RX 5600 XT, the 1660 Super certainly falters. While the 5600 XT has its own issues with variability, even the non-updated VBIOs cards outperform the 1660 Super and the 1660 Ti. However, this comes at the cost of a much higher price. In terms of performance-per-dollar, the 1660 Super is still the better option when compared to either the 5500 XT or the no-VBIOS-update 5600 XT.

What difference does clock speed make between models?

Truthfully, not very much. Fundamentally, these are all based on the same graphics chip, so you aren’t going to see massive performance leaps based on factory overclocking alone. A higher factory OC reduces the need for you to worry about pushing it yourself, though, and tends to indicate a superior cooling system in play.

Should I overclock my GPU? Does it matter?

…however, GPU overclocking can still be worth it, especially in those scenarios where you need just a bit more performance to get a stable frame rate. Don’t expect gains any greater than about 5-7 percent unless you’re really lucky with the silicon lottery.

How width and length impact compatibility

Width and length are the two specs that have the greatest impact on compatibility since they literally determine whether or not your graphics can fit inside your system.

Width is measured in PCI slots, and most GPUs are dual-slot. Unless you’re running other expansion cards in your system or you’re extremely space-constrained (ie, an HTPC or ITX build), you should be perfectly fine with a dual-slot graphics card.

Length is more likely to be an issue, though. Length is measured in millimeters (mm), and refers to the longest side of the graphics card. Keep the length spec in mind before buying a card, and double-check your case specs to ensure you have the clearance to fit your GPU. While you can return an oversized GPU if need be, that’s still an extra hassle you’d rather avoid, right?

Common video ports and what they’re used for

Now for a quick word on the three ports you’ll see on your GTX 1660 Super GPUs, and which ones to use for what purpose.

How to install a graphics card