The Nvidia GeForce GTX 1660 Ti is one of the most popular Nvidia GPUs currently available on the market. It occupies an interesting space between the GTX 1660 and RTX 2060, and between the 10-Series and 20-Series generations as a whole.

Regardless of where all these cards end up in the long run, today you’re here for one thing: finding which GTX 1660 Ti is best. We’ve narrowed down the picks to five options, and we believe at least one of them should be suitable for any gamer reading this article, so long as you came here with the intent to buy the best GPU under $300.

Enough of the pretense, though. Let’s hop into it. 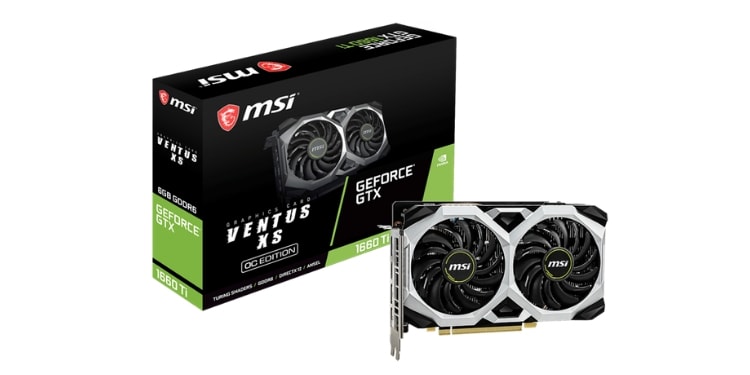 The MSI Ventus XS is our pick for best budget balanced GTX 1660 Ti. While it comes at MSRP and has the lowest factory OC, its cooler design should actually lend itself quite well to user-end overclocking. In addition to that benefit, you also have the fact that this is one of the shortest GTX 1660 Ti’s available, beaten only by the EVGA card later in the list. That should make this card easier to build around than most, especially in smaller cases.

A curious note is that the VRAM type is mistakenly labeled as GDDR5X on the Amazon page, as opposed to the GDDR6 standard for GTX 1660 Ti cards. Upon further investigation, we’ve confirmed that this card uses the fastest GDDR6 standard, so you shouldn’t see any performance drops from choosing this one.

The best budget GTX 1660 Ti is this Windforce card 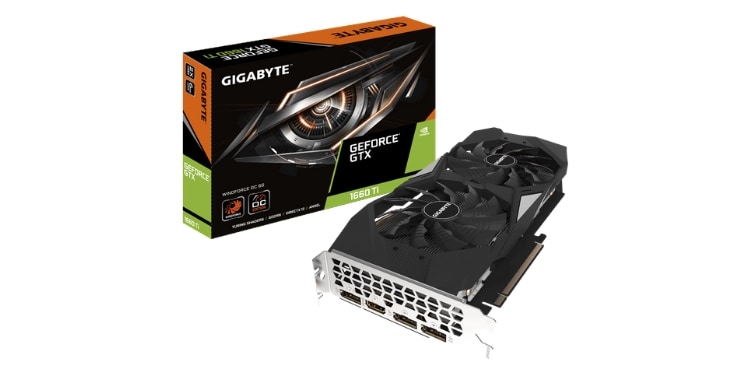 The Gigabyte Windforce GTX 1660 Ti has two big pros in its favor.

The first is inherent in the name: the Windforce cooler design. While Windforce coolers may not look as sleek and sexy as some other GPU designs, it does its job and pushes air fairly well. This lends itself to the second benefit, a respectably-high 1800 MHz factory overclock. Thanks to the cooler design, that should lend itself well to better overclocking headroom.

When all of that is available at MSRP, it’s hard not to take notice. If you don’t mind a slightly longer length than other 1660 Ti’s, the Gigabyte Windforce is the best MSRP GTX 1660 Ti. 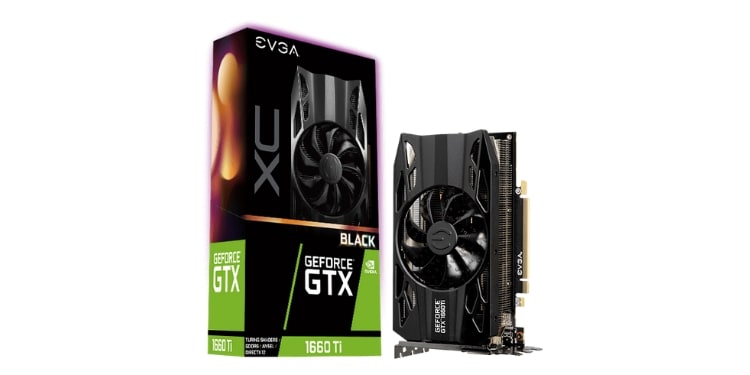 First up, the pros. It supports DVI for those still using DVI displays in #CurrentYear, and it’s the shortest card by a considerable margin. It accomplishes this by using a thick, three-slot cooler, which should provide some good overclocking headroom in a high-airflow chassis.

Unfortunately… this is not reflected in its factory OC, which is only 1770 MHz. That’s the second-lowest on this list and a little bit of a disappointing showing from EVGA. It makes sense, though-- with its dense heatsink and single-fan design, this card is going to be very reliant on ambient case temps and airflow in order to accomplish better overclocks.

Make sure you have a complete airflow configuration if you’re going to get this card-- an intake fan blowing cool air, and an exhaust fan getting rid of hot air. The more intakes, the better. That’ll be the key to pushing its factory OC higher.

Otherwise, this is the best GTX 1660 Ti for a smaller chassis… but keep in mind that its three-slot design will interfere with expansion on a Micro ATX board.

The ASUS Dual OC is the best airflow GTX 1660 Ti 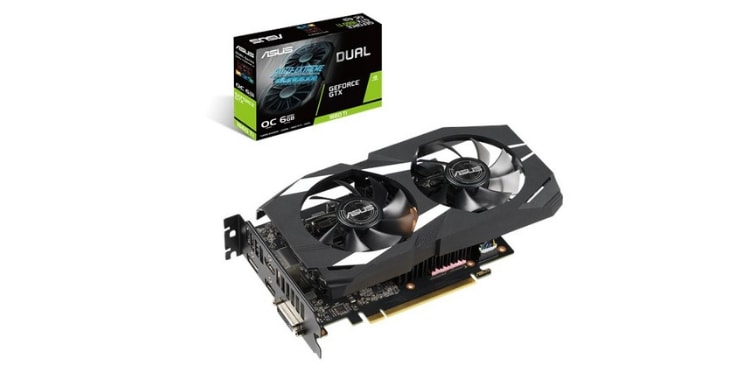 To an even more extreme extent than the EVGA card listed above us, the ASUS Dual OC GTX 1660 Ti is reliant on good airflow. Its open cooler design means that a lot of heat is going to be exhausted directly into the case, and you’ll need strong airflow to keep everything cool. This is a bit of a double-edged sword.

The positive side? Asus card has managed to achieve a very strong 1830 MHz overclock on this despite its short length. That short length should also come in handy in smaller cases, too.  (Also, there’s a DVI port, for you guys still using DVI.)

The negative side? This card will be very reliant on good airflow in your chassis. You’ll want plenty of high-quality case fans to effectively keep this card-- and your case-- cool. Otherwise, you’ll be at risk of significantly raising ambient case temperatures and reducing user-end overclocking headroom.

Also, this card is a bit more expensive than other options. 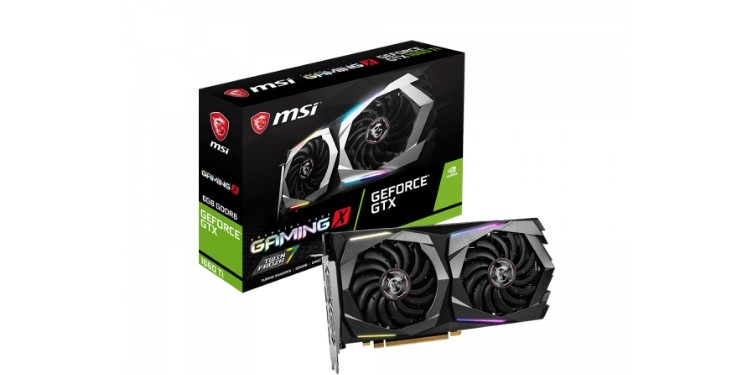 Last but not least is the fastest GTX 1660 Ti, the MSI Gaming X edition.

First and foremost, look at that RGB! It lines the fans and the MSI logo, and it’s the main reason for you to spend extra on this design compared to other cards, too. At least, it would be if this card didn’t also boast the fastest factory overclock of all the cards on this list-- a whopping 1875 MHz. Not bad, MSI. Not bad.

So it has slick RGB lighting, the best factory OC, and even a strong cooler. What’s the catch?

The length and the price. While the length of this card is… about average for GPUs at large, it’s long for a GTX 1660 Ti, which usually trends shorter than this. Additionally, the pricing of this card is pushing over $300, and you would only need to spend about $40 more to grab the much more powerful RTX 2060. A correspondingly decked-out 2060 would probably also cost much more than its $350 MSRP, though, so that makes sense.

If you want the best out-of-box performance and aesthetics, the MSI Gaming X GTX 1660 Ti is the best choice for you. If you’re willing to pay for it, that is. Otherwise, take a look at the other options on this list.

Let’s face it: not everyone understands what “clock speed” means, and you may not know how this GPU performs yet. We’re going to walk you through the need-to-know information about the GTX 1660 Ti in this section, including how it stacks up against competitors. If you have any questions after finishing this article, you can ask them in the comments below.

Above, we’ve embedded a video from Digital Foundry that shows off the GTX 1660 Ti in the most intensive modern games. Sans the awfully-optimized Assassin’s Creed Odyssey, you’ll see that the 1660 Ti pulls ahead a consistently 80-100 FPS number in modern games at max settings and 1080p. You’ll also see a lot of surprisingly strong performance in VR and 1440p, though 1440p may end up requiring a few settings adjustments here and there to keep framerates above 60 FPS.

Like we said earlier, the 1660 Ti is an unquestionable 1080p powerhouse, and a surprisingly powerful 1440p/VR card as well. If that sounds like it may meet your needs, then we highly recommend it.

Unless you want AMD’s Game Bundle, the GTX 1660 Ti unquestionably defeats all of AMD’s offerings in this price range. However, that doesn’t mean that the GTX 1660 Ti is reigning uncontested… if anything, it follows an ancient internet proverb.

“Trust nobody, not even yourself.”

In this case, GTX 1660 Ti’s greatest competition is just… other Nvidia GPUs. The Nvidia 1660 offers most of its performance at a much lower price, and the RTX 2060 boasts a modest performance increase and a ton of extra futureproofing features (like ray-tracing) for not much more money. While the GTX 1660 Ti’s price puts it in an awkward position, it’s ultimately still a great card all around.

Length and width measure, well… you get the idea.

More specifically, “width” measures the number of expansion slots that the graphics card takes up, and “length” measures the length of the longest side. These will both help you determine how the card will fit into your PC, though width shouldn’t ever be a problem outside of truly extreme low profile PC builds.

Length is the greater concern, especially if you’re building in a Micro ATX or Mini ITX tower. Be sure to run our length measurements against those provided by your case manufacturer- you wouldn’t want to buy a GPU that’s too big to fit inside!

Clock speed measures the speed of the GPU cores inside the graphics card. An overclock is when this clock speed is pushed beyond its normal limitations (If you want to know more about overclocks, check out our article all about them.). Users are normally the ones responsible for this, but in the case of GPUs like the ones listed above, manufacturers are actually doing it themselves, resulting in what’s called a “factory overclock”.

Generally-speaking, the factory overclocks should serve as a solid measure of how these cards perform in comparison to one another. These are truthfully marginal boosts in most scenarios, but it does save you the extra work of overclocking it yourself.

In modern Nvidia GPUs, there are three common ports used. HDMI (TV standard), DisplayPort (PC standard), and USB-C (VR Headset standard). If your display device of choice is somehow missing one of these connectors, we recommend either an adapter like this one or a long overdue monitor upgrade.

NVMe vs M.2 vs SATA: Which is the best for your SSD?