by Jacob Woodward
in Reviews

When building a new PC or even revamping an older one, picking the correct motherboard to match your processor is the first thing you should do. You’re going to want to decide if you want to pair your CPU with the best features possible, or save your money and choose a budget-friendly motherboard in an effort to spread your money evenly across the whole build. We’re going to be giving you the necessary information in an effort to help you choose the right motherboard, detailing our picks for the best motherboard for AMD Ryzen 9, Ryzen 7, and Ryzen 5 processors, alongside some knowledge for what differentiates motherboard variants.

Do motherboards work with any CPU?

The short answer to this is no. There are a variety of different CPU generations, different brands, and chipsets that all affect what motherboard will be compatible. If you read on, we’ll talk about each of these and the terminology you need to look out for.

When it comes to CPU generations, more specifically for AMD’s Ryzen range, you need to look out for which variant you have, and what motherboard you want to use with it. Usually, you want to acquire motherboards that cover two generations of AMD processors, for example, the MSI MPG X570 Gaming PRO Carbon WiFi Motherboard will work with third and second-generation processors. This gives you a couple of options, go for the pricer, latest generation CPU or have the option for the more budget pick. Additionally, going for one of these motherboards opens up the option for upgrades later down the line. You can go for a second-generation CPU such as the 2700x and potentially upgrade to the 3900x in the future.

You only really hear of AMD and Intel when talking about CPUs for PCs and for good reason, they’re the only big hitters out there. There are other chip manufacturers such as Qualcomm and Mediatek but these are the bigger names in mobile manufacturing and tend to stay away from the PC scene. So, which is best? AMD or Intel? Well, it’s all down to preference and to an extent, budget. Intel was the main staple for a number of years providing the highest quality chips out there but AMD burst onto the scene with top-notch quality CPUs at very affordable prices, enticing the PC builders out there to switch.

Similar to the generation problem, when motherboards are manufactured, they are for specific chips thus making the sockets tied to certain characteristics. The main socket types are Pin Grid Array (PGA) and Land Grid Array (LGA). These socket types apply compression through either a lever or a full plate to marry connections and keep it from dislodging. These two socket types are so popular with manufacturers as you avoid the risk of bending the pins when inserting the chip into the socket, and you can easily replace your current CPU with a different processor when required. On the other hand, devices that use the lesser-known Ball Grid Array (BGA) socket require soldering, meaning you’re stuck with that component for the lifetime of your machine. 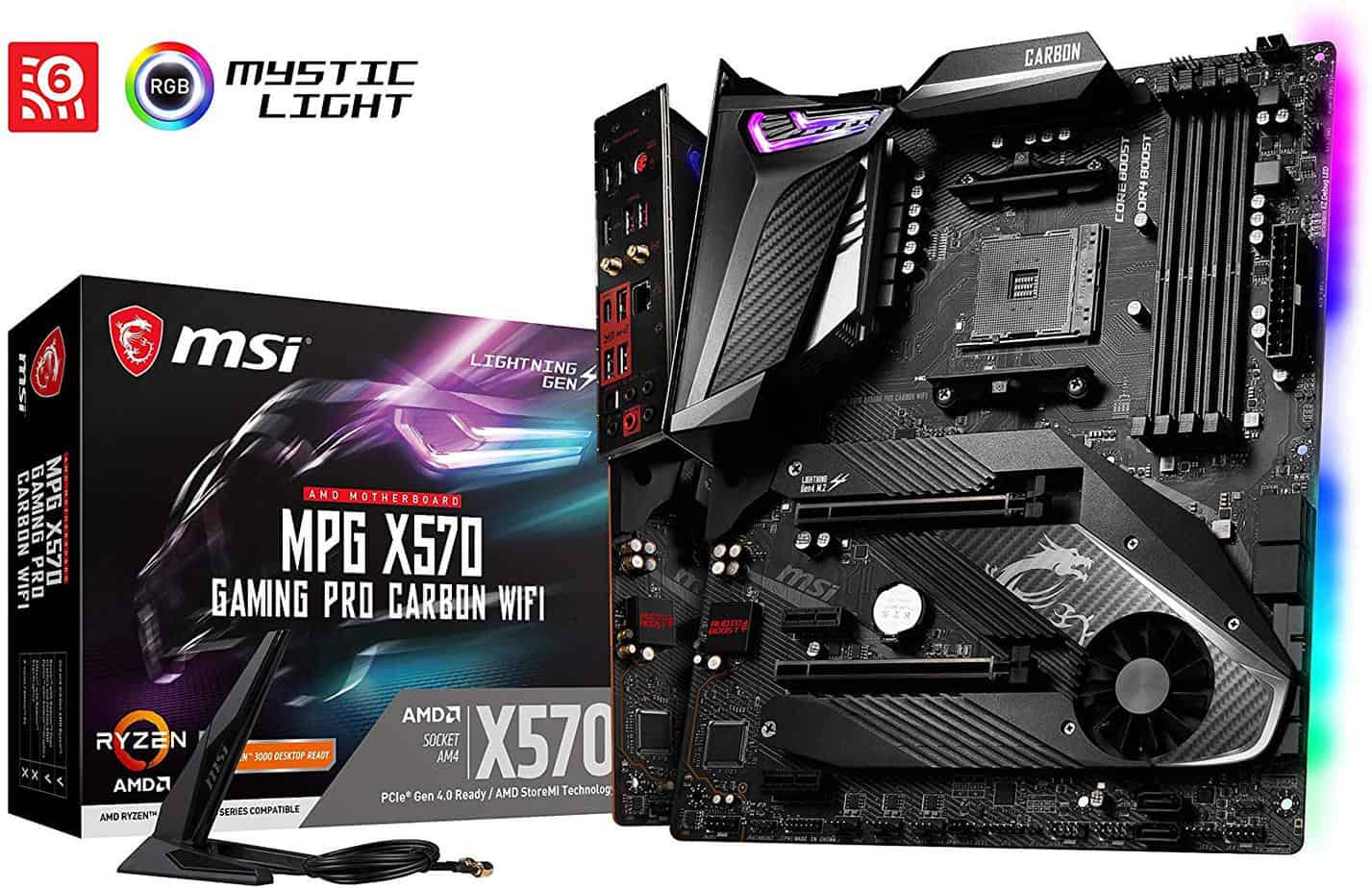 When spending a large amount getting the latest CPUs out there like the 3900x and 3950x, you’re going to want a motherboard to match. The MPG X570 Gaming PRO Carbon WiFi from MSI displays some great features alongside the latest technology and unrivaled build quality. You’re also going to get some of the best motherboard cooling around with patented FROZR heatsinks, keeping your components at optimum levels, maximizing their longevity under intense pressure. Additionally, if you’re looking to slot some SSDs into your rig, the aforementioned FROZR heatsinks offer the best thermal protection around in an effort to extend their lifespans and reliability. Unlike the more cheaper options around, the X570 Gaming PRO Carbon includes WiFi and Bluetooth support straight out the box so no adaptors for your wireless peripherals are necessary. Finally, a nice, premium touch from MSI is the preinstalled IO shield. It saves you having to fiddle around putting in a separate shield, while also preventing electrostatic discharge damage through a patented design. Like the other options in this article, you’ll be getting the Core Boost, Audio Boost and DDR4 boost technology, which you would expect for the price you will be shelling out. It also supports both second and third-generation Ryzen processors, so if you don’t want to opt for the 3900x or 3950x, you can still add options like the Ryzen 7 2700x.

MSI B450 Gaming Plus Max Motherboard 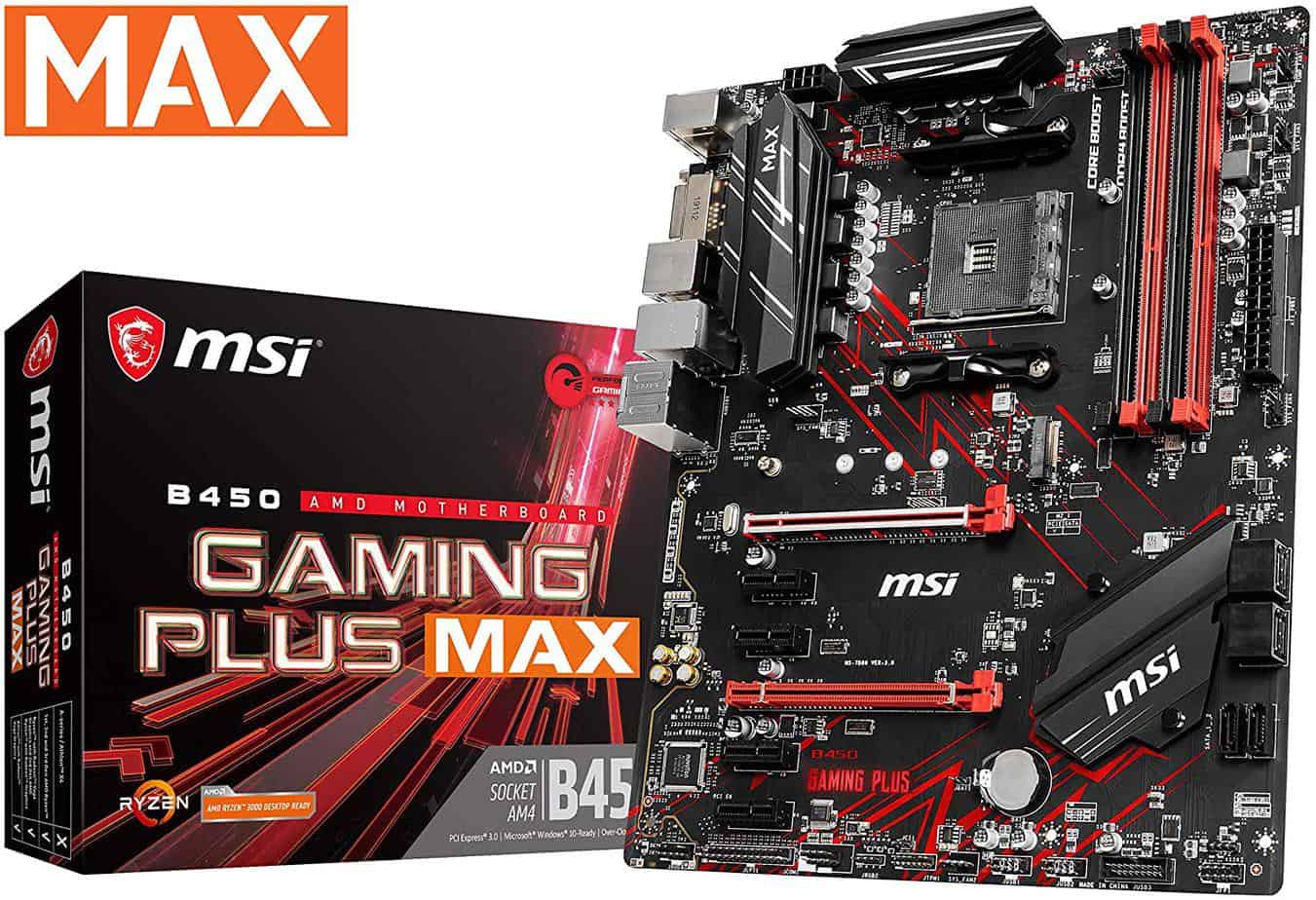 The MSI B450 Gaming Plus Max is the B450M’s big brother, offering up better specs, features, and overall build quality, providing a lightning-fast experience. Because MSI are the manufacturer you know you’re getting a reliable product coupled with the top tech that goes into all their products. The Core Boost and DDR4 Boost inclusions get the most out of your CPU and RAM, increasing performance under intense pressure. Similarly, Audio Boost offers up an HD audio processor, dedicated amplifier and high-quality audio capacitors providing you with exceptionally clear sound quality. Of course, you will be wanting a cross-gen Ryzen supported motherboard and the B450 Gaming Plus Max does just that. You’ll be able to plug in both second and third-generation Ryzen 7 processors, making it perfect for both the 2700x and 3700x. If you do opt for the 2700x then later down the line you could drop extra cash on upgrading to the 3700x or even look at the pricier Ryzen 9 3900x. 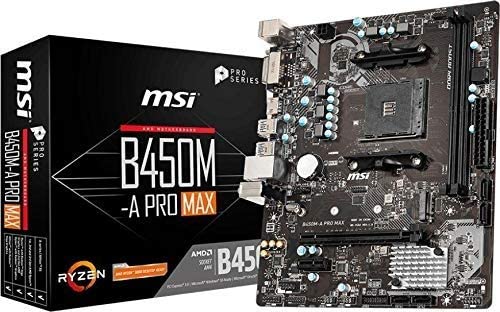 With AMD’s Ryzen 5 range of CPUs, you’re getting a powerful processor at an affordable price. Thus, we’ve selected a motherboard that offers some fantastic features but at a more wallet-friendly price. The MSI B450M-A PRO MAX motherboard offers all the necessary features to make both the 2000 and 3000 CPUs perform to their highest potential. With features like core boost and DDR4 boost technology, you’ll not only be maximizing CPU performance but RAM performance too. You’re also looking at some great physical hardware with PCI Express Steel Slots alongside high-quality audio capacitors offering both reinforced graphics card support and a pure audio signal respectively. Additionally, to keep your components cool, there are 2 4 pin system fan connectors and 1 4 pin CPU fan connector allowing for multiple fan placements. As you can see, even though this is a budget-conscious choice, it certainly isn’t feature lacking, and potentially could replace its more expensive counterparts for many looking to spend more money on other important components.

Having the knowledge of what motherboards will be compatible with your CPU is an absolute necessity when building a PC, or even inserting upgrades. You don’t want to waste hours of your time, spend unnecessary money, and potentially damage components, especially with the price of CPUs like the Ryzen 9 3900x and 3950x. Looking at the three motherboards for their respective AMD CPU variants, they’re all at the top of their game when considering the price points. The MSI MPG X570 Gaming PRO Carbon WiFi Motherboard offers up the best of the best in terms of features for the Ryzen 9 processors and the MSI B450M-A PRO MAX Motherboard provides the best value to feature ratio for the Ryzen 5 processors. However, if you want to explore other options for Ryzen 9, Ryzen 7 and Ryzen 5 CPUs you can, with our other best picks broken down for various uses.