What is the best RX 5500 XT? We pick from various partner cards to find out

AMD’s RX 5500 XT is the successor to the last-gen RX 580, retailing for about the same price MSRP (around $200, give or take a $20) but offering a marginal performance improvement over its predecessor. This is AMD’s new entry-level GPU using the Navi architecture, but how does it stack up against the competition, and which one should you get, if you decide to get it? 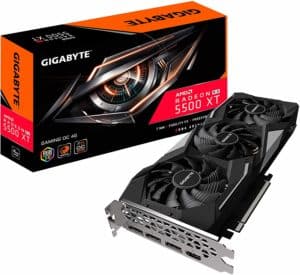 The Gigabyte Windforce RX 5500 XT may be the cheapest on our list, but it’s still a very strong contender. At the time of writing, it’s retailing for only $190. For that money, you have the aforementioned Windforce cooler, boasting a beefy heatsink design and three fans.

You have the dual-slot form factor that should work in just about everything, and you have the same boost clock frequencies as the other graphics cards on this list. Unfortunately, this doesn’t come without downsides.

One downside is the length, which is a whopping 281 mm. If you’re buying a budget graphics card, chances are that the rest of your system may be similarly budget. If that’s the case, your chassis may not be able to fit a card of this length inside of it. Be sure to double-check to see whether or not that is the case before making a purchase.

The main downside is that this is technically a cut-down version of the RX 5500 XT, having only 4GB of GDDR6 VRAM compared to the 8GB of every other option on this list. We’ll discuss in the buying guide, how this impacts performance.

The Sapphire Radeon Pulse RX 5500 XT is our pick for the smallest RX 5500 XT. Like every other card on this list, it’s a dual-slot card, but unlike those cards, it’s pretty short! It’s only 233 mm long, which means that it should fit very easily into all but the most brutally confined PC builds.

Also, it has a backplate! This helps alleviate GPU sag over time and protect the PCB from excess dust buildup over time. (Obviously still dust your PC out occasionally, though. Don’t be a monster.)

Sapphire has built up a reputation as one of the better AMD GPU vendors on the market, and the Pulse version of the RX 5500 XT is no different. While it may not have all of the heatsink mass that the other cards on this list do, it does have rather sizeable fans to keep it all cool. This should allow for decent overclocking headroom, but don’t expect to squeeze too many more frames out of a card in this price range. 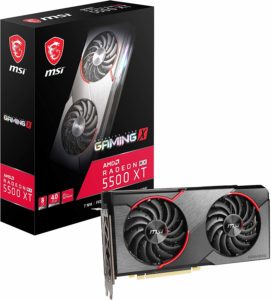 The MSI Gaming X Radeon RX 5500 XT is one of our top picks, and it exemplifies an ideal balance between all the things we’re looking for in a graphics card. It isn’t too long or too short, so it should have both great cooling performance and not take up the entirety of the inside of your PC. It meets all the expected VRAM and clock speed targets, and it even has a nice little RGB logo, though that’s somewhat tainted by the red plastic on the front shroud.

The beefy heatsink and fan setup here should allow this card to reach its full potential, even with overclocking. Truthfully, though, all the cards on this list have a pretty good cooling setup going on, and are all kind of overkill for the level of performance that this GPU is actually capable of putting out. If the length is just what you’re looking for or you really want that RGB logo, go for this one. Otherwise, consider one of the other options on this list. 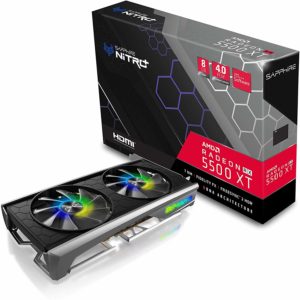 Last but not least is the Sapphire Radeon Nitro+ RX 5500 XT, and…

…yeah, you caught us. This is pretty much just the #2 pick, but more expensive. For that extra money, though, you get some RGB on both the fans and the logo! That makes this 5500 XT particularly ideal for vertical mounting, provided your chassis supports the feature. For all we can tell otherwise, though…this is basically just the #2 pick, but with RGB. If that sounds good to you, go for it- otherwise, consider the other options or even a competing GPU, which we’ll discuss just below.

Now, let’s dive into the nitty-gritty of everything you need to know.

What’s the difference between the 4GB and 8GB models?

This part out of the way first: not all that much. This is more of an RX 480/580 situation than a GTX 1060 situation, meaning the VRAM difference doesn’t generally correspond to an actual performance difference outside of very specific circumstances. You will only notice a difference between 4GB and 8GB versions of this card when either playing modern games with high/ultra texture detail, 1440p or higher resolution, or both.

Anything that requires more raw VRAM- higher resolution, high-res textures- will benefit from the 8GB VRAM pool. If you’re only gaming in 1080p, though, the 4GB VRAM should serve you perfectly fine, and you should only shell out for the 8GB if you want to future-proof for higher resolution gaming a little bit.

The overall performance of this card makes it suited for modern gaming at 1080p, high-to-max settings and 60 FPS. 1440p gaming may also be possible with the card, but expect to turn down settings to high or even medium in extreme circumstances to maintain 60 frames.

This is where the other shoe drops.

The pricing on these…isn’t all there, at least at the time of writing. These cards are retailing for $200 and slightly under/over, and that is very fierce competition in Q1 of 2020.

There are still RX 580s and RX 590s with the same or better performance that retail for well under this card’s $200 price point. While those stocks are sure to empty out over time, right now cards like the XFX Fatboy RX 590 and the Sapphire Pulse RX 580 are kind of embarrassing the RX 5500 XT line. If these cards or other RX 580s/590s are available for cheaper whenever you’re reading this, go ahead and grab them instead: the 5500 XT is not worth the extra money in that scenario.

As far as performance against modern options goes, the 5500 XT’s closest performance is the GTX 1650 Super. It definitely outperforms that card, but the pricing starts to look questionable in the face of the GTX 1660, which is often available at the same (or lower) price.

Also, this card doesn’t support real-time ray-tracing, but neither does anything else in this price range. If you’re looking for that particular feature, we recommend taking a look over at the RTX 2060 line.

Want some detailed benchmarks of this card against its competitors in modern games? Check out Digital Foundry’s review.

Not a lot, especially since all of these cards are inexplicably rated for the exact same boost clock frequencies.

Even if you’re able to squeeze out more clock speed with your own user-end overclocking, though, don’t expect to get that much more performance. These are firmly budget cards, and that means the margins are usually pretty thin as far as overclocking goes. Even with cards that are allegedly good for overclocking, gains of more than 10 percent are practically unheard of.

Width measures the number of PCI slots taken up on your motherboard and chassis by the installation of this graphics card. Fortunately, all of these RX 5500 XTs are 2-slot cards, which means this part specifically shouldn’t be a concern for any standard chassis!

If you’re using a slimline prebuilt or something, on the other hand…it probably won’t fit. You’ll want to find some specialized low-profile GPUs for that particular headache.

How is length measured, and why does it matter?

Length is the more important of the two physical measurements and measures the length of the longest part of your graphics card. This is the part that’ll actually be extending into your chassis, and if there isn’t enough clearance for it, you’ll need to return your GPU.

You probably don’t want to do that, so do your due diligence and check the specs of your case before buying a graphics card. You should be able to find a spec for VGA/GPU/expansion card length in there somewhere. If for some reason you can’t find this information, get a tape measure and do it the old fashioned way.

If you’ve selected a GPU and it looks like a tight fit, that’s…mostly fine, but do consider how it may impact the rest of your system. For instance, overly-long-but-still-in-spec GPUs may interfere with things like an intake fan or driver installation. Build smart today so you don’t get headaches tomorrow.

Common video standards, and what sets them apart

Finally, let’s take a moment to talk about video standards. Below we’ve listed the five most common