A few days ago, post-RTX 3080 launch, we reported that the 3000 series graphics cards family was going to get a lot bigger thanks to rumors of an RTX 3060, RTX 3080 20 GB, and RTX 3070 SUPER/Ti. Now, those rumors have been confirmed by GALAX via a leaked internal presentation.

The presentation slide showcases various new RTX 3000 series GPUs that we mentioned earlier and what seems to be a comparison chart based on performance. You’re just about able to make out the RTX 2060 at the bottom of the chart and the RTX 3090 on the opposite end of the spectrum. What’s most surprising is that they’re suggesting the Titan RTX and RTX 2080Ti won’t be outperforming the RTX 3070 SUPER/Ti SKU but, that’ll probably be up for debate until any confirmation occurs. 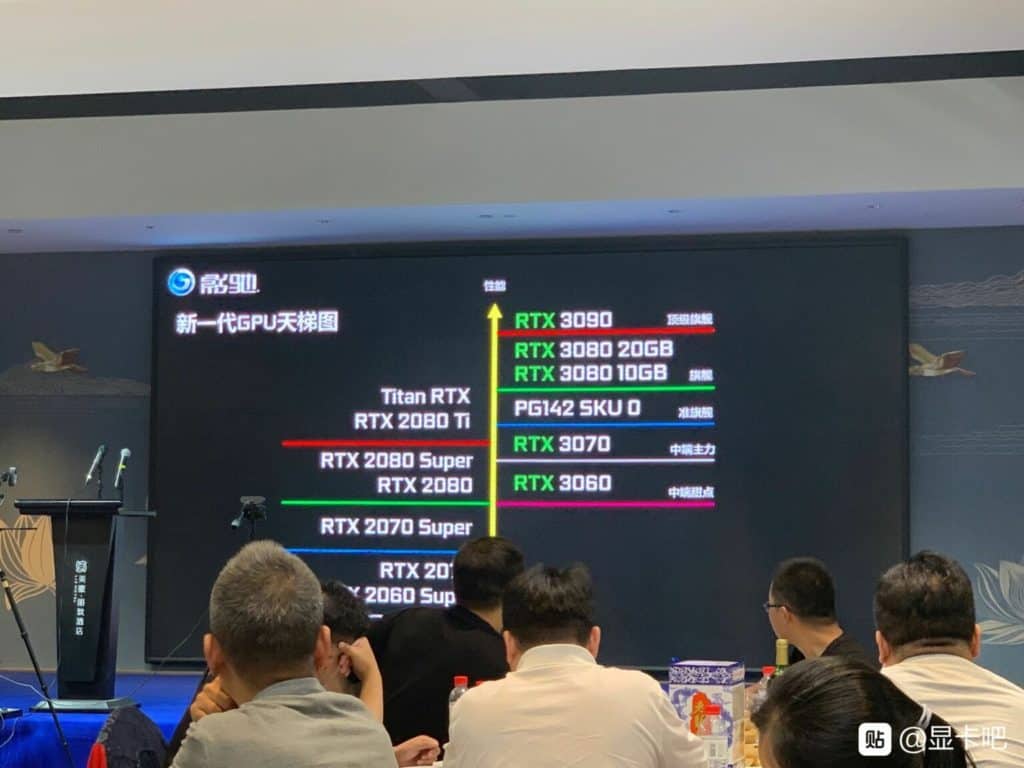 As the name alludes to, the RTX 3080 20GB will have double the memory available to you, making it an extremely attractive option for those looking to save a little money by not opting for the RTX 3090. There’s also a suspicion that both the clock speed and core configuration will have improvements, again, making it a solid choice compared to the 3090. While the price wasn’t detailed in the presentation leak, there are many rumors floating around that it’ll retail at $899, $200 over the base 3080 model.

The RTX 3070 SUPER/Ti will reportedly feature a PG142 SKU 0 board along with 6144 CUDA Cores and 16 GB of GDDR6 memory all coming together to produce a much more budget-friendly option at a rumored price point of $599 to compete with $499 AMD Navi alternatives.

Finally, the RTX 3060, the go-to choice for low-cost gaming PC builds. This GPU, like the others, will apparently have two SKUs, both the base and the SUPER/Ti variant, upping the performance slightly. The base 3060 variant is supposedly on par with the previous-gen RTX 2080 graphics cards based on the presentation slide which will more than likely render them obsolete in the near future.

All in all, the fact that Nvidia has even more RTX 3000 series SKUs in their locker is great for consumers, giving them more options for speccing out their new gaming PC. Moreover, due to the RTX 3080 having so many ordering issues on launch, those who missed out, could very well get a second chance, with even more power this time.