The RX 5600 XT is a new mid-range GPU from AMD, built to replace both of the cards it had at this price point prior- the RX 590 and RX Vega 56. It performs roughly equal to or better than the latter in most scenarios, though there are a few caveats to that that we’ll need to discuss later in the article.

We’ve selected four RX 5600 XT models for you to choose from, each offering their own benefit over the others. Whether you’re looking for the cheapest possible 5600 XT, the smallest, or the one that has the prettiest RGB lighting, we have you covered!

Let’s dive into it. 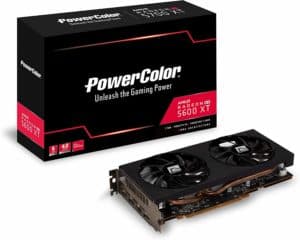 First up is the cheapest 5600 XT on the market, PowerColor’s standard model. Its exterior is dominated by the simple black cooling shroud, and visually this card is pretty much just the platonic ideal of “a graphics card”. There are no real crazy visual flairs or over-sized heatsinks here: it’s a simple dual-slot GPU, through-and-through.

Unfortunately, that comes with a downside here. PowerColor’s basic RX 5600 XT model does not support the upgraded VBIOs that can be used by the other cards on this list. As a result, it loses some performance, which we’ll discuss in more detail in the buying guide below.

The one no-caveats benefit this card offers is the fact that it’s the smallest. It’s only 2 slots, and it’s only 230 mm, so it should comfortably fit in just about any system.

Overall, we’re comfortable recommending this GPU. The others sit much closer to $300 in pricing, and you do save a fair bit of money by opting for this one. However, we recommend consulting the relevant section in the buying guide before making a purchasing decision.

At the time of writing, the XFX THICC 2 PRO is discounted and available at the same price as this card. While lengthier at 280 mm, it does support the aforementioned VBIOs update. Consider it as an alternative if the other cards on this list are still too pricey for you. 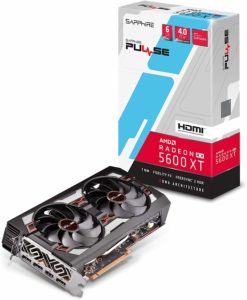 The Sapphire Pulse Radeon RX 5600 XT is one of the leading models of this card, and the one sent to most reviewers, even prior to the VBIOs update. Because of this, reviewers are able to provide both pre- and post-update performance numbers, and it turns out that does this card many favors. For a detailed rundown of this topic, scroll on down to the relevant section in the buying guide.

For now, let’s focus on this card in its own right. It’s a typical dual-slot GPU and comes at a longer-but-not-too-long length of 254 mm. This should fit within the vast majority of systems on the market, and especially any that properly follows a Mini ITX (or larger) standard. No dark magic should be needed to coax this one into a low-profile system, though #3 and #4 are a bit of a different story.

Honestly, we don’t really have anything bad to say about this card. It’s a fairly solid all-rounder pick, and when it’s available, it’s among the cheapest of the updated VBIOs models. However, its availability is low as of February 2020, and that may make the ability to actually get this card difficult. It’s clearly one of the more popular 5600 XTs available.

Fortunately, you still have plenty of other options to choose from. Let’s move onto a few of those. 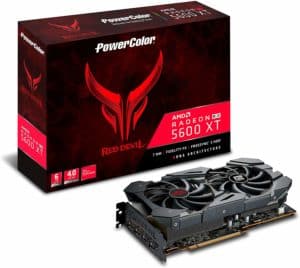 PowerColor is well-known at this point for their infamous RED DEVIL line of graphics cards. RED DEVIL graphics cards are set apart by their three-slot cooler designs and are consistently built to bring out the best possible performance of their underlying architecture. The tale of the RED DEVIL RX 5600 XT is no different, and that makes this a quite viable option for anyone with three PCI slots open in their PC needing a GPU in this price range.

Despite the beefy triple-slot cooling design, the length of this card is actually much more reasonable, at 240 mm. This should make it a comfortable fit inside of most PCs, so we’re comfortable recommending it to anyone who can accommodate a 3-slot graphics card inside of their PC. If you need that slot below your GPU, or this barely fits inside your chassis, though, consider another option.

Also, this is one of the few RX 5600 XTs with guaranteed support for the updated VBIOs. If you’re reading this in March 2020 or later, it should ship with that VBIOs pre-installed, but if it isn’t, just head over to PowerColor’s website to get the download for your system. 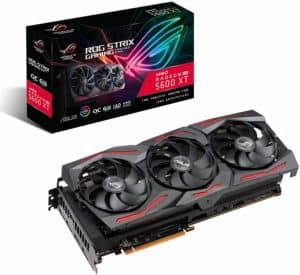 Last but certainly not least, we have the ASUS ROG Strix Radeon RX 5600 XT. This is the beefiest 5600 XT available on the market, in terms of both its price point and overall size. This card has a 3-slot cooling design and clocks in at 304 mm long, which makes it dwarf even the Red Devil card in comparison. It boasts the best out-of-the-box factory OC numbers of all the available cards, and most users are reporting that the VBIOS update is already applied.

This can most easily be explained by ASUS waiting a little longer to launch this card than everyone else did.

So out of box performance, no tweaking by the user required…this is definitely the best RX 5600 XT. While not every graphics card of the same SKU is made equal, we can state with some confidence that this and the Red Devil should both provide the best overall performance and headroom for further overclocking. (Though to be honest, the VBIOs update is already kind of a major overclock in its own right: you’re unlikely to push these cards much farther after that. We’ll explain below.)

As an added bonus, this card also has some light RGB on both its front and backplate. It isn’t super flashy, but it does add a nice extra visual frill for those who want it.

Note: While most are reporting the VBIOS update as already applied on their models, ASUS still offers the download on their site. If you feel like the card isn’t performing to its fullest, click here to get it updated.

In this section, we’re going to cover everything you need to know about the RX 5600 XT, so you can make an informed buying decision.

What’s this about the VBIOS?

First up, let’s address the elephant in the room: the VBIOS situation.

We’re not gonna mince words here: AMD messed up this product launch, badly. Reviewers had already received their review units when, at the last minute, AMD opted to push a VBIOS update on all cards with enough headroom to accommodate it. This VBIOS update transformed the card from a GTX 1660 Ti competitor to an RTX 2060 competitor, because Nvidia had done a last-minute price drop to the 2060 in order to keep a competitive advantage.

Considering what was already present in this price range, AMD should have built around this upgraded spec from the start, but for whatever reason…they did not. They seemed to think they could just launch this card as it was, not eat into the sales of their own RX 5700, and that Nvidia just…wouldn’t do anything about it.

The difference that this updated VBIOs makes is far larger than anything your typical user overclock is capable of. Depending on the card and game, this results in performance increases of anywhere from 5 to 10 percent, which is a ridiculous level of variability for what should be a fixed level of performance across all 5600 XT cards.

The rough baseline to expect here is 1080p high-to-max settings at 100+ FPS in modern games and 1440p medium-to-high settings at the same framerate. With the VBIOS update, you should be able to consistently push the higher end of that spectrum and enjoy a roughly ~7 percent average performance increase.

Unlike the competing RTX 2060, this card does not support real-time ray-tracing. While this isn’t a widely-implemented feature yet, and performance-intensive where implemented, this is still worth noting for those who want to future-proof their GPU purchases. We personally prefer raw performance over extras like that, but you may feel differently.

Without the updated VBIOS, this card outperforms the GTX 1660 Ti by a decent margin. The PowerColor reference model is about the same price, so that makes this card a viable alternative pick if available for the same or only slightly higher price.

With the updated VBIOS, this card becomes a full-blown RTX 2060 competitor…and kind of cannibalizes the RX 5700 by performing uncomfortably close to it. This is reflected in the pricing of some of the higher-end cards, which are quite close to the entry-level RX 5700 models. If you have a bit extra to spend and you don’t want to worry about all of this VBIOs nonsense, you may be better suited just getting an RX 5700.

For a look at benchmarks in modern games, take a peek at Digital Foundry’s RX 5600 XT benchmarks.

Since AMD is in the business of cannibalizing their own sales now, yeah, probably. Click here to check out our RX 5700 recommendations.

In this specific case…probably not by a lot. The biggest factor that will determine how your RX 5600 XT performs compared to other cards of (supposedly) the same model will be whether or not the VBIOS update is supported, and to what extent the card in question can handle it. For most GPUs, overclocks will only have a marginal impact on performance in any direction. You can’t turn an RTX 2060 into a 2070, for instance.

Width is measured in PCI slots on your chassis and motherboard. Standard ATX supports up to seven of these slots, whereas Mini ITX boards have only one, with matching chassis having at least 2 slots to account for multi-slot GPUs. This one usually won’t cause compatibility issues unless you’re going to be using multiple expansion cards at once.

How is the length measured, and why does it matter?

Length is measured in millimeters and is the element most likely to determine whether or not a GPU fits inside your chassis. Be sure to check the length spec of your GPU against your case’s maximum GPU length spec to prevent any issues!

Common video ports and their uses

Last but not least, let’s take a moment to talk about everyone’s favorite thing: display standards!

Another update to Windows 10