Most games do indeed require you to invest in an augmented reality headset of your choice. These headsets are your keys to the virtual world, and without them, you’re simply locked out of the game.

However, there are a few VR-centric games out there that don’t rely solely on headsets, allowing you to enjoy them as a flat gaming experience. These inclusive games are the ones we’re going to focus on today.

You’ll come across two categories when shopping around for VR games: VR and VR Only.

Typically speaking, VR Only titles are designed for use with VR headsets exclusively, and you will not be able to hack your way into them using normal screens.

Then there are the titles labeled as VR games. These kinds of games are usually more flexible, giving you the choice to play flat or to fully immerse yourself in their worlds via a headset.

VR Games You Can Play Without a Headset and How to Do It?

Without further ado, let’s take a look at some of the best titles you can enjoy in both VR and as a flat game.

In this game, players enjoy a collection of VR mini-games. It’s sort of like a super futuristic PlayStation reimagining of Nintendo’s Mario Party franchise.

The Playroom VR supports local multiplayer, and players without a headset can join in the fun by using the PS VR social screen. It’s actually designed for this very purpose, which is fantastic and an intelligent move on PlayStation’s part, but unfortunately, this kind of game is something of a unicorn.

Developed by Sony, Bound is an incredibly abstract yet gorgeous game that follows a dancer through a fractured, ever-morphing fairy tale world.

It also offers you the choice of playing in VR or flat, so those that don’t have a headset can still embark on this epic, beautiful quest.

The seventh incarnation of this stone-cold classic horror survival game is all you’d expect it to be: enthralling, eerie, and downright terrifying.

Much like Bound, Resident Evil 7: Biohazards is a flat game with PS VR compatibility, so you can play it with or without a headset.

Half-life: Alyx is another survival game, although with a completely different aesthetic to Resident Evil. This is actually a VR-Only title, but players have been using mods to make it flat-compatible.

Y’all know what Star Trek’s about. This game can be flat or VR.

Skyrim blew the open-world gaming format wide open with its expansive, player-defined experience, and now the VR edition of this game takes you even deeper into the Fatherland.

You can buy it for Xbox here, or for PS4 here. You can also Find the Steam key here, so you can play it on PC.

The same is true of the post-apocalyptic, open-world extravaganza, Fallout. You can buy a standalone flat version here and enjoy it on your monitor.

The hellish hallways of Doom can be enjoyed flat or in VR depending on the game you choose. The non VR version can be bought here.

Is There a Way to Trick Your PC into Thinking You Have a VR Headset? 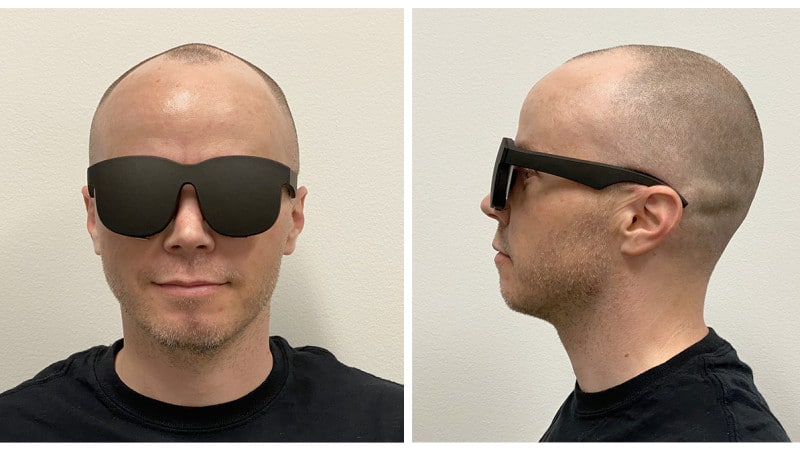 It takes quite a lot of effort, and it won’t work on most VR games, but there is a fairly ingenious way in which you can (sort of) fool your PC into accepting the absence of a headset. This is done by replacing all the controlling aspects of a headset, such as head tracking, with other means.

If you want to give it a try, here’s what you do…

Hook up Some Controllers

Alternatively, you can set up full-body tracking with a Kinect.

There you have it, folks. You can enjoy a number of VR-related games without even buying a headset, but if you want to fully join in with the fun, we recommend an Oculus headset. Enjoy!