If you are just getting into the amazing world of 3D printing the likely things that annoy you most are the length of time it takes to print anything on the large side, and how infuriating it is when a print fails 10 hours into a 12-hour print or worse.

I’ve been having issues with some of my longer prints recently. Everything is fine until about nine hours in and then all of a sudden my extruder starts struggling to push through the filament and it’s driving me nuts as generally this failure is happening overnight and I’m getting up in the morning to a failed print. It’s happened four times now on the same piece but in different places so I’m confident there is nothing wrong with the model.

I use Octoprint so I have already set up a webcam to monitor things but obviously, this doesn’t help when I am off in the land of nod. If only there was a plugin that could use AI to monitor my camera feed and look for issues and pause my print and send me a text message if things go awry.

First off the bat, I appreciate the name of this addon to Octoprint – I’m not going to call it a plugin because it is much more than that and that would do it a disservice. It would have been easy to call it RemotePrintingMonitor or something ultra-bland like that, but this is clearly more thought of as a ‘product’ rather than your regular bit of add-on code.

And that’s fine because unlike the majority of plugins, to get regular use from the Spaghetti Detective it’s going to cost you some money, but more on that later.

In the meantime if you want to find out so much more about PC Guide’s deep-dive into the world of 3D printing click here. Or even head here to find our best 3D printer for beginners.

Using AI to monitor your prints 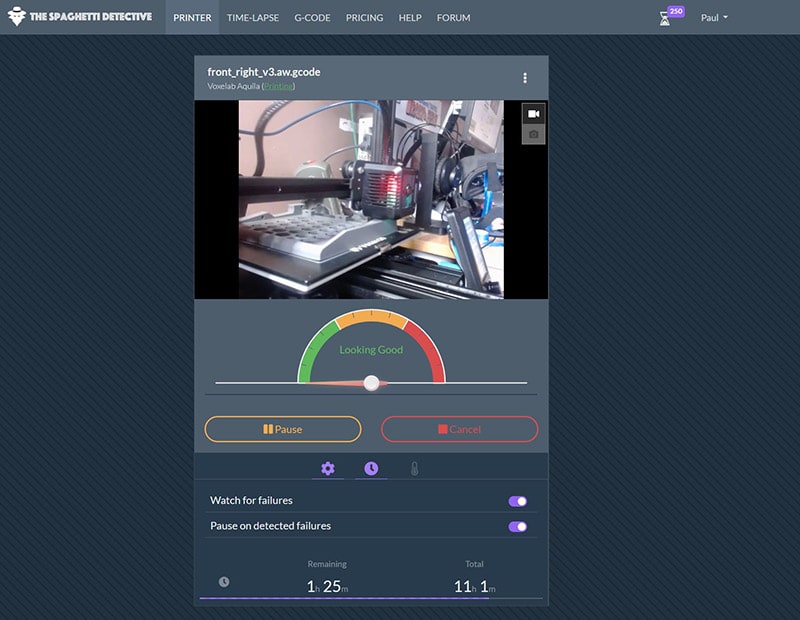 So how does it work? Well to start with you need to install the plugin into your Octoprint setup and head over to the Spaghetti Detective website, create yourself an account and link your printer and instance of Octoprint to each other and you are all set.

From here on in when you print through Octoprint the detective will analyze your incoming video stream looking for tell-tale strands of filament wrapping around all over the show like spaghetti. Once it detects it the program will pause your print and fire off a notification to you in any number of different ways, SMS, iPhone push notification, email, or even integrated into something like Slack. Very clever. You can tweak the sensitivity in the settings to make it ultra observant if you don’t mind the occasional false alarm, or you can wind it down so it literally needs to be like a ball of yarn before the alarm sounds.

In reality though, I left it on default everything pretty much and it seems just fine.

The elephant in the room with 3D printing, and to be fair it’s a rare old elephant, is that printers can be a fire hazard to some extent. You are dealing with parts that remain heated in excess of 200 degrees C and lots of melting plastic. The accepted rule of thumb is that you should never leave your 3D printer completely unattended. In reality, this doesn’t happen. We leave them running overnight or while we are out at work and rarely think twice about the potential dangers. Anything we can do to mitigate coming back to a burned-down house is a huge plus then and the Spaghetti Detective not only warns you of issues but also sends gcode to shut off the temperatures to your bed and hotend in event of a problem. Still though, don’t leave your printers totally unattended folks.

Another top tip is to install a smoke detector in the room you print in – it will cost you under $10 and in the event of catastrophe could save your bacon. 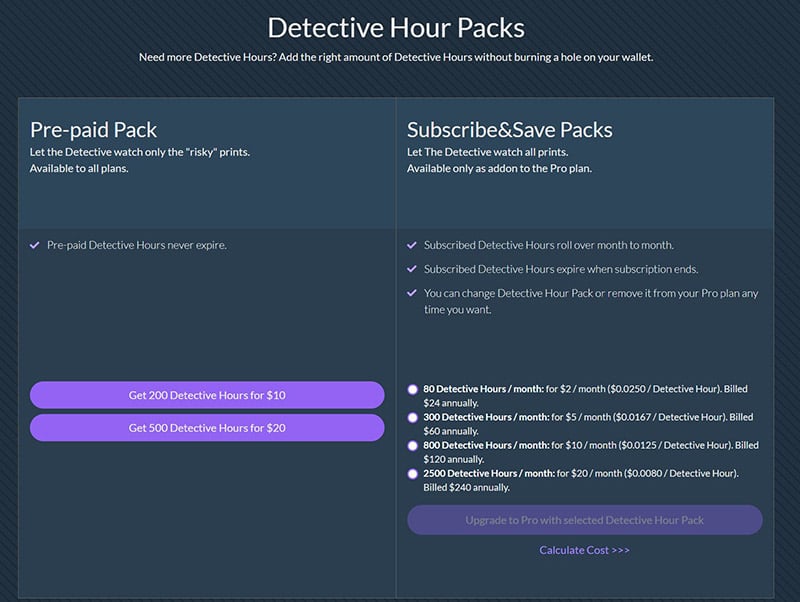 Okay, so I mentioned before there was a cost to all these bonuses and potential peace of mind. As the website says, you have better things to do what watch over your printer. Too true but whether you see the value in paying for getting some that time back is where things get interesting.

Firstly, the Spaghetti Detective works by charging you for hours spent watching your print. It’s like paying your little brother to sit there and yell if something goes wrong. This is important because there is actually a free tier, which is great, but you only get 10 hours of detection with it per month. As mentioned I have had a 12-hour print that has failed four times so far so this would rule me out of this tier, and that’s with just the one print.

There is a pay-as-you-go option where for $10 I can purchase another 200 hours which you would think would have me covered, and at least I’m not committed to yet another monthly subscription.

Moving up from the free tier we have the Pro level subscription which is either billed as $48 annually (4$ per month) or monthly at $6. Not exactly wallet shaking but even though you get extra additions such as better quality cam streaming and more integration options (things like the aforementioned Slack and so on) you only get 50 hours of detection with this plan. Any more and you need to add the pay-as-you-go option.

Now I’m no maths genius but this still only works out for an occasional user. I know I would probably need more than 50 hours a month – I’d burn through that in a week so I’d have to top up my hours for more money.

I’m actually better off just paying the $10 and getting 200 hours (or even taking 500 hours at $20 than getting involved in having another monthly fee coming out of my account.

I think devs get too easily lost within the subscription model because they only think of their own product. I did a bit of personal accounting the other month and was stunned at the cumulative total of my monthly subscriptions – Netflix, Youtube, various Patreons, Spotify, Plex etc etc. I don’t need to keep adding to this and am now making a conscious decision to stop subscribing to stuff that is anything other than mission-critical for my life (yeah, that’s none of that lot above I know).

There has been an attempt to mitigate this at least because any spare hours you have from the 50 roll over on the Pro Plan so you could build a buffer if you have a quiet couple of months.

As a Pro Plan member, you also get access to the Subscribe and Save packs which come at a “favorable rate” You can add anywhere from 80 to 2500 extra hours a month from between $2 and $20 per month. Of course this is billed annually – and anybody who follows me on Twitter knows this is a huge pet peeve of mine. I don’t like seeing things broken down to small monthly costs only for there to be no option to pay it like that and be faced with lump sums only). If I already have to pay a monthly amount to get these perks, at least let me top up that amount. I don’t want to have to pay monthly AND then pay an annual amount on top.

Don’t get me wrong, I know devs need to survive and many people will probably disagree and tell me to stop being so churlish but for me, the pricing of the Spaghetti Detective is confusing and a little bit all over the place and it detracts from an otherwise useful product in the main. 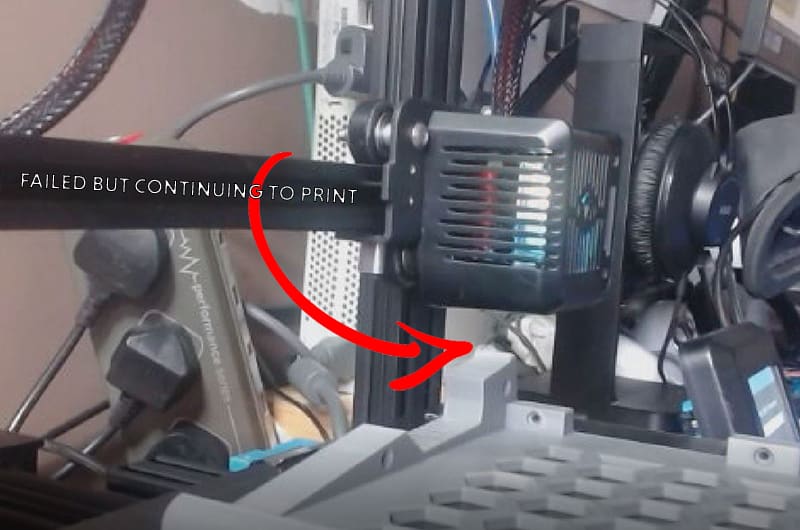 This is where Spaghetti Detective shines – for the most part. It manages to pick up stringing on prints and bang down hard on the pause button very quickly. In many cases before it is even glaringly obvious. It does however seem to be limited to the problems of filament not sticking and stringing away.

While writing this review and having my persistently failing print monitored by the Spaghetti Detective it failed to notice that the last inch of my print simply stopped appearing as my extruder has jammed yet again – there’s a point watching the video back where the nozzle continues to rise but the object stops growing. This doesn’t seem to be something that is being monitored which is a shame. You can definitely see a little bit of extraneous material that I would hope might have been picked up.

In defense maybe it would have if my camera positioning was different or I had done something else. We will never know. What I do know is it’s easier to be critical of something if you have potentially just paid $250 for a year’s worth of detection. That’s a lot of money if it can only detect spaghetti-failed prints.

The future of 3D print monitoring?

I feel as though I have been really harsh concentrating on the flaws of The Spaghetti Detective but I still really like what the dev Kenneth Jiang is trying to achieve for the 3D printing community. For me it’s just over-promising a little at this stage but if we could wind forward a year or so and see where it goes things could get interesting. To do that we need to support the developer and if that means coping with the slightly messy pricing structure then that might be a necessary evil.

Any saved print is a bonus but if I’d just paid a not unsubstantial amount of cash and assumed my safety was now increased, only to have a print fail and have plastic sat in a hot end for maybe 10 hours going nowhere because my printer has developed an issue while I relax at work thinking everything is being monitored, that’s not great.

So let’s take The Spaghetti Detective for what it is, a great idea that works well in one area but that still needs development in a number of key places, and until that point, we don’t fall into the trap that we can rely on it and what the slick website tells us about how it will make our life easier. 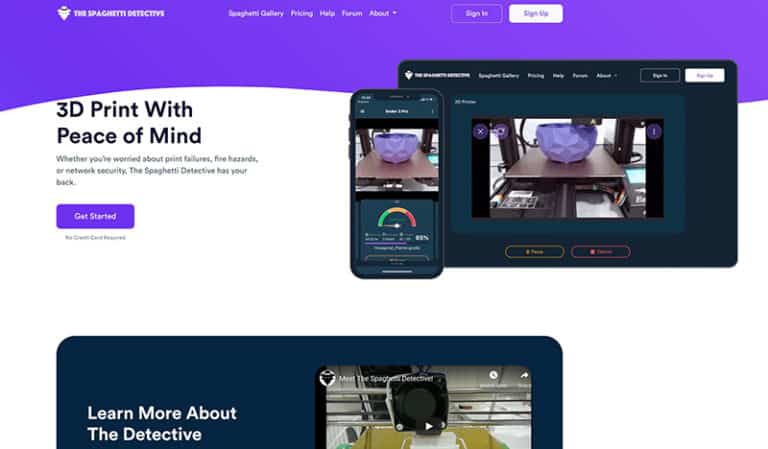