Top routers from a networking powerhouse 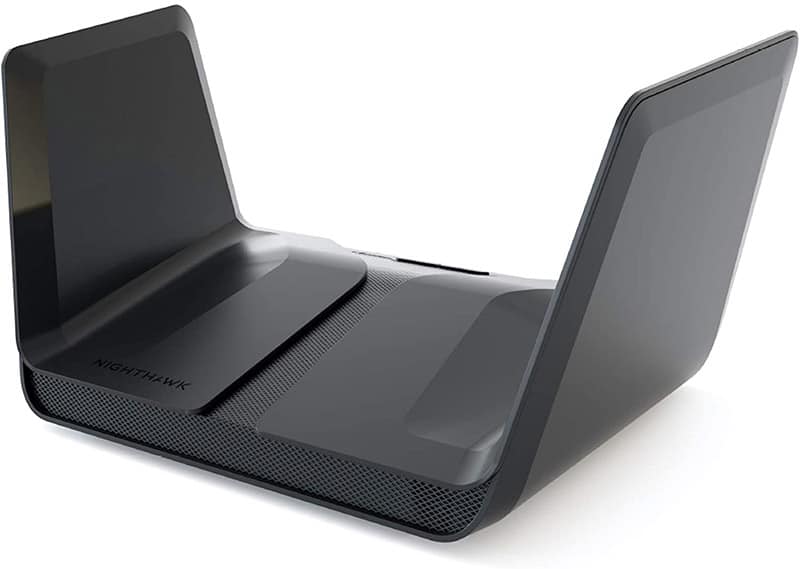 If your current router is feeling the strain from the glut of wireless devices from phones and laptops to TVs by way of smart fridges that now depend on a home network, then a router upgrade may be in order. Among the leading manufacturers of home networking solutions, Netgear is among the most recognized and well respected. The name is synonymous for many with a networking powerhouse and the very best routers money can buy.

With no shortage of options to choose from, finding the right Netgear router can be challenging. The company has multiple models for virtually every scenario, use, and home, from budget dual-band workhorses to costly, high-performance routers boasting the most cutting-edge wireless features such as support for the Wi-Fi 6 standard.

If trawling through Netgear’s line-up leaves you despondent and you need pointing in the right direction, you’ve come to the right place. In our guide, we’ll be highlighting some of the best Netgear routers around. These are all sure to inject some much-needed speed, range, and stability into your aging home network. 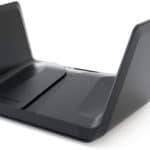 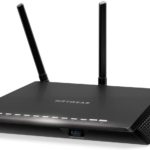 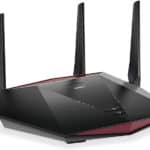 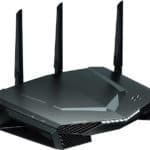 With a design that sits somewhere between an elaborate paper airplane and a B-2 Spirit stealth bomber, the dual-band Netgear Nighthawk RAX80 router marries top-end throughput speeds with support for the Wi-Fi 6 standard. In our eyes, this router is a wise investment for those who want excellent performance right now and want to future-proof their home network for the years ahead.

Four antennas integrated into the curved wings of the Netgear Nighthawk RAX80 deliver theoretical speeds up to 1.2 Gbps on the 2.4 GHz band and 4.8 Gbps on the 5 GHz band. Beamforming+ and 4×4 MU-MIMO tech ensure multiple devices can communicate simultaneously with the router at all times and enjoy incredible speeds. When paired with Wi-Fi 6 compatible devices, the router supports 160 MHz channels for Gigabit wireless speeds.

With five Gigabit Ethernet ports, you can quickly hook up all manner of wired devices such as consoles and PCs. We were also particularly impressed with the suite of security features, not least Netgear Armor, cybersecurity software that protects against malware, trojans, and phishing via Bitdefender security and VPN, and the versatile Circle Smart parental controls.

While Netgear says the Nighthawk RAX80 can cover up to 2,500 sq. ft., real-world results are less impressive. The router performs admirably indoors at a range of roughly 200 feet, but any further, speeds and stability drop significantly. This is relatively common for most routers, and we’d suggest pairing the Netgear Nighthawk RAX80 with an array of extenders for larger homes.

However tempting it may be to fork out $300 or more for a top-spec Wi-Fi 6 router, something more modest suffices for most households. None delivers quite as much value alongside an attractive blend of performance, great speeds, and security as the Netgear Nighthawk R6700.

The Netgear Nighthawk R6700 is a dual-band router that runs on the Wi-Fi 5 standard, reaching theoretical speeds up to 450 Mbps on the 2.4 GHz band and 1,300 Mbps on the 5 GHz band. Good speeds are one thing, but the router backs this up with unwavering wireless stability by employing Beamforming+ and Advanced QoS tech that automatically zeros-in on devices, perfect for smooth web-browsing, buffering-free video streaming, and low-lag gaming on multiple devices.

Much like the pricer RAX80, the Netgear Nighthawk R6700 features excellent security features in Netgear Armor and Circle Smart parental controls. The Nighthawk App makes easy work of managing all aspects of the network (update firmware, check speeds, and troubleshoot issues, etc.) as well as stress-free initial setup. On the unit itself, there are four Gigabit Ethernet ports and a USB 3.0 port to easily expand your network with hard-wired devices and external media storage drives.

The Netgear Nighthawk Pro XR1000 is a beastly Wi-Fi 6 router designed specifically for gaming thanks to a purpose-built OS, features, and plenty of speed to boot.

The router features six streams with theoretical speeds up to 5.4 Gbps – 600 Mbps on the 2.4 GHz band and 4,800 on the 5 GHz band. On the Wi-Fi 6 front, the Netgear Nighthawk Pro XR1000 includes 160 MHz channel support for up to 4.5 times the performance of Wi-Fi 5 routers. Naturally, you’ll need Wi-Fi 6 compatible devices to benefit from these blisteringly fast speeds.

On the gaming side of things, the Netgear Nighthawk Pro XR1000 runs the DumaOS 3.0 operating system. The OS features a trove of gaming-specific features, including geofencing to filter game servers, a ping heatmap, connection benchmarks, QoS bandwidth allocation to prioritize gaming devices, and a traffic blocker to prevent unwanted network activity hogging bandwidth. When combined, these features work to reduce latency and offer a more stable ping.

Other features include four Gigabit Ethernet ports, a triple-core 1.5 GHz CPU, four powerful antennas, and one USB 3.0 port. Like other Netgear routers, the Netgear Nighthawk Pro XR1000 features Netgear Armor for added security, although in the context of an already expensive piece of kit, this is somewhat of a letdown given the need to pay for a subscription once the month-long free trial runs out.

For those that aren’t worried about Wi-Fi 6 support quite yet, the Netgear Nighthawk Pro XR500 is easily one of the better gaming-oriented routers that Netgear makes.

You’ll find many of the same gaming-specific features as the more expensive Netgear Nighthawk Pro XR1000, and these work just as well on the 802.11ac Wi-Fi 5 standard. These include the DumaOS, a customizable gaming dashboard to track bandwidth, ping, wireless status, traffic prioritizing, QoS, network analytics to track down bandwidth-hungry devices, and the same geofiltering utility that hones in on the best servers.

In terms of specifications, the Netgear Nighthawk Pro XR500 sports dual-band Wi-Fi, four data streams per band to maximize speeds and stability, MU-MIMO, Beamforming +, four high-performance external antennas, and theoretical speeds up to 2.6 Gbps, 800 Mbps on the 2.4 GHz band and 1733 Gbps on the 5 GHz band.

The Netgear Nighthawk Pro XR500 doesn’t include Netgear Armor but is nevertheless decently equipped for security with VPN support through the OpenVPN connect app and WPA/WPA2. On the unit, there are four Gigabit Ethernet ports to connect consoles and multiple desktop gaming rigs, as well as two USB 3.0 ports for media sharing across the network.

Despite the lack of Wi-Fi 6 support, the Netgear Nighthawk Pro XR500 still necessitates a considerable investment compared to more general use routers on Netgear’s roster. As such, we recommend only taking the plunge if you genuinely need a decked-out gaming router with all the bells and whistles.

It’s hard to go wrong with the Netgear Nighthawk RAX80. With Wi-Fi 6 support, top speeds, and a slew of welcome performance and security features, this router should suit even the most demanding setups.

For general use, the Netgear Nighthawk R6700 stands as one of the best routers Netgear offers. Easy to set up and manage with speeds up to 1.75 Gbps, this router provides an easy and cost-effective upgrade to most average households.

With Wi-Fi 6, speeds up to 5.4 Gbps, and an array of gaming-specific features, the Netgear Nighthawk Pro XR1000 delivers everything needed for a lag-free gaming experience.

Those that aren’t concerned about future-proofing their home network for the inevitable widespread adoption of Wi-Fi 6 will find a similarly impressive gaming-focused router in the Netgear Nighthawk Pro XR500. Fast, reliable, and with the same gaming features as the pricier XR1000, the router will transform even the most humble home network into one fit for the most intense multiplayer games.

Lastly, those that want a no-frills router suitable for most home networks with decent speeds and no-nonsense setup should strongly consider the extremely affordable but capable Netgear R6080.

With that, we’ll wrap up our guide to the best Netgear routers. Feel free to get in touch in the comments section below with any comments, questions, or suggestions.