Today’s high-powered PCs are sometimes far too bulky for their own good, taking up unnecessary room on either your desk or workspace area that could be better used for other pieces of your setup. Thanks to technological advancements though, there are a bunch of mini PCs on the market that do a solid enough job.

One company in particular that is known for its mini PCs is Geekom, and below, we’re going to be taking a look at one of their newer models: the Geekom Mini IT8.

One of the first things you’ll notice about the Geekom Mini IT8 is its stylish design. The all-black chassis with blue LED accents looks great, and it’s small enough to fit on almost any desk. Yes, it is a little on the simple side but you’re not buying the IT8 for flashy RGB, you’re picking it up for its compact size and functionality.

As for ports, the IT8 has two USB-C ports, three USB-A ports, an HDMI port, display port, a headphone jack, and an Ethernet port. It also has an SD slot on the side of the PC which is especially handy, allowing you to get rid of those annoying dongles and SD card readers that typically hang out of your PC.

For a PC of its size, the IT8 comes with some pretty solid internals that do the work of a machine much larger. Below is the full spec list:

Processor: Intel Coffee Lake i5 8259U

One thing to note here is that it does come with Windows 11 Pro installed which is a welcomed addition and something that you’ll likely not see from other mini PC manufacturers.

While all the above specs are quite impressive considering the size of the device, you can actually upgrade some parts if you wish to do so. Take the RAM for example, you can throw an extra stick in there and boost the IT8’s multitasking that bit more.

So far, I’ve been really impressed with the Geekom Mini IT8’s performance. Despite its small size, it’s been able to handle all the everyday tasks I’ve thrown at it with ease. It’s also been nice not having to deal with a ton of excess cables and wires. One thing I will say though is that the fan can get pretty loud when the PC is under a lot of strain, but other than that, I haven’t had any major issues.

However, if you’re looking for a mini PC that performs under intense strain or for gaming purposes, the IT8 isn’t the one for you. It’s not designed for that and you’ll be better off with a full-sized desktop PC or gaming laptop.

The main downside is the price, as it’s a bit on the expensive side if you want the highest-powered option. This comes in at $549.99. However, if you’re looking for a mini PC that’s got enough power for most users, the Geekom Mini IT8 is definitely worth considering. You could also go for the lower specced version which is still a solid option at a much more attractive $439.99. This will still do the job, especially if you’re not wanting to do highly intensive tasks.

So, what’s the verdict? The Geekom Mini IT8 is a great option for anyone who needs a powerful and stylish mini PC. It’s perfect for general computing tasks or if you need an additional PC in the family home and don’t want something bulky. It’s also a great alternative to the NUC line of mini PCs if you don’t like the look of those particular devices. 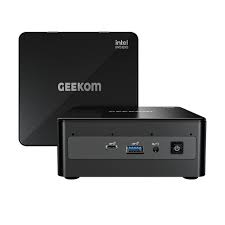