One of the best gaming projectors of 2019 can turn your wall into an entertainment center; find the best for you

A projector doesn’t suffer from the same physical limitations as a traditional TV screen and is able to provide an unmatched level of immersion in the right environment. Since you’re here, we’d hazard a guess that you know that, and you want to bring those advantages to your gaming experience.

So let’s find the best gaming projector. We’ve assembled five options below, including two high-end 4K options for those who can afford them. It’s important to note that these will be more expensive than equivalent TVs, though, especially the 4K projectors. There are trade-offs in play here.

If you’re looking for mini projectors that are suitable for gaming, we have to give you the bad news: those don’t really exist. This is due to high input latency, and the same applies to even the best portable projector. If you aren’t playing games that rely on perfect timing and inputs, though, we’d recommend this Vankyo projector. We don’t really consider it “Gaming” grade, but it does about as good a job as a portable projector can. 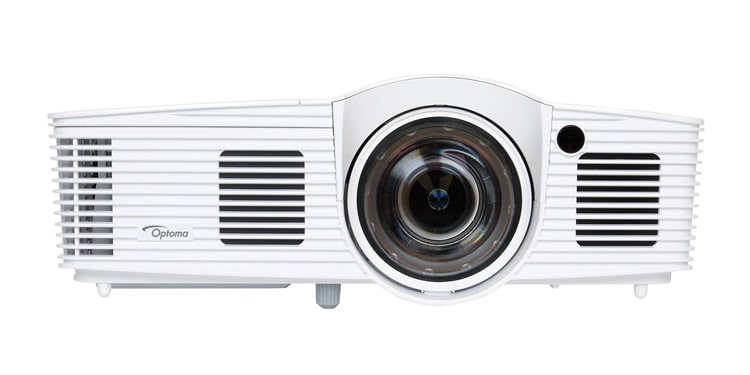 The Optoma Technology GT1080 Darbee is our pick for best budget gaming projector. It’s the cheapest projector that we were able to find with a confirmed latency low enough for a respectable gaming experience. (Still higher than most TVs and monitors, though that’s just a limitation of the technology here.)

In addition to having the most accessible price point of our listed options, the Optoma actually supports Amazon’s five monthly payments system. This allows you to pay a 5th of the price + full tax upfront to receive the item, with 4 more equally-distributed payments being charged each month thereafter. Just make sure that you’ll be able to handle these payments, though, since missing one can have major consequences.

Price aside, this is a pretty solid 1080p 60 FPS gaming projector.

Built for balanced viewing and gaming on a projector 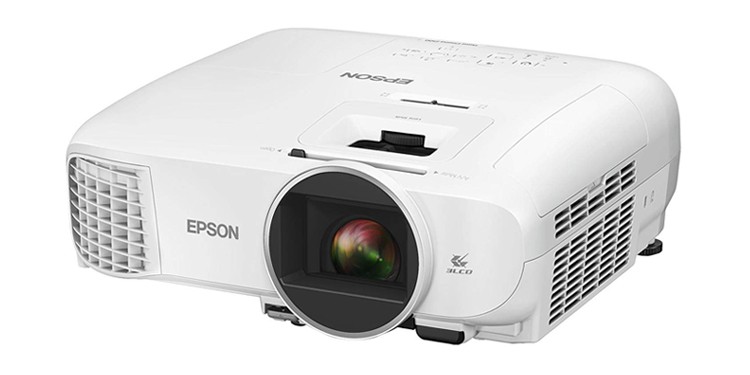 The Epson Home Cinema is another of our budget gaming projector options, though this one is balanced a bit more toward general viewing than our #1 or #3 picks. While cheap, it also doesn’t support monthly payments, so you’ll need to buy this one upfront if you actually want it.

This model boasts an improved contrast ratio over most over projectors in this price range, which makes it great for dark scenes in movies and games. The downside of this projector is found mainly in its range-- specifically, you’ll need to operate it from a longer range than #1 and #3.

The highest-rated of all video game projectors 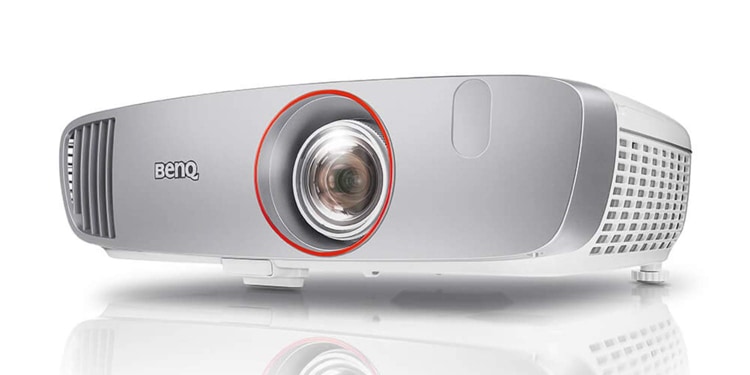 The BenQ HQ2150ST is the highest-rated gaming projector, but if you’re familiar with BenQ, that probably doesn’t surprise you. BenQ is known mainly for their high-end gaming monitors, so it makes sense that their projectors would also be optimized to provide a great gaming experience.

This projector isn’t much more expensive than the others we’ve listed, and it supports five monthly payments like our #1 option. Unfortunately, it does come with decreased brightness and contrast ratio when compared to our first two picks. If your real main priority is gaming, though… this is the projector for you.

The best 4K gaming projector under $2000 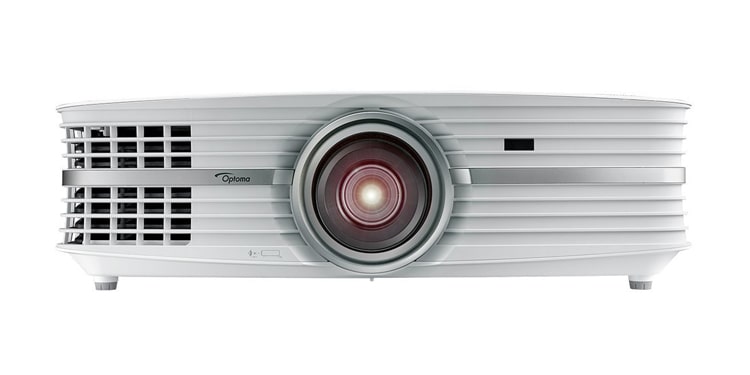 The Optoma UHD60 would be our first recommendation to those looking for a 4K projector. It does have a hefty ~$1600 price tag when compared to the previous options on this list, but compared to our #5 pick that’s pennies.

What you get for your money here is a truly stellar image and screen size. The actual contrast ratio probably isn’t as high as the “Dynamic Black 1,000,000:1 contrast ratio” provided by marketing, but it’s still superb enough to provide a superior experience compared to any of our cheaper options. The latency is also respectably low for a projector, but we wouldn’t recommend this (or any projector, for that matter) for competitive gaming.

There are a good few downsides here-- mainly more space required, a higher price, and a much larger, heavier form factor. However, these are all worthwhile trades if you have native 4K content to run with this display.

The best 4K home projector, if you can afford it 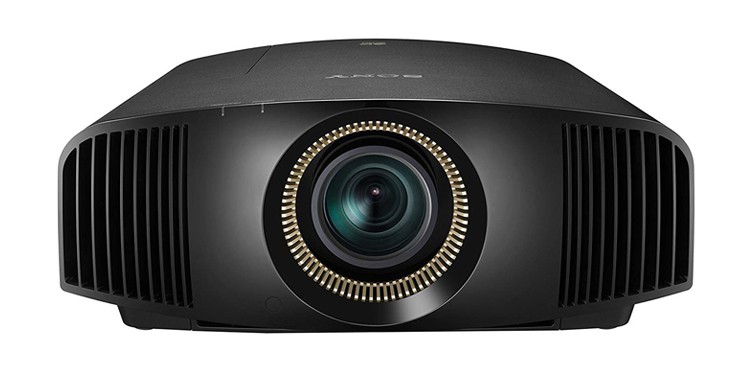 Last but not least is the Sony VLPVW675ES. This one pretty much brutalizes all but the richest of consumers, since it retails for a whopping $10K. In exchange, you get a DCI 4K image (4096 x 2160 instead of 3840 x 2160), which means it can play cinema as it’s meant to be seen; input lag low enough for a great gaming experience; and unmatched HDR and 3D support. This is the projector for consumers right now, but most won’t be able to afford it.

If money is no object and you have a 4K gaming/entertainment setup, get this projector. The downsides of space, weight, and price likely won’t matter too much to you.

However… if you care even a little bit about your wallet, we recommend opting for one of our cheaper picks.

Buying The Best Gaming Projector For You

If you aren’t familiar with all the tech specs and jargon we threw around, don’t worry: we have you covered. We’ll use this section to help break down and demystify a lot of this.

Resolution: will you need 4K?

First up, resolution. The great thing about projection is that it tends to have excellent image quality in an appropriate environment, and most images will look stunning at native resolution, regardless of size.

Additionally, chances are that very few of you are actually consuming 4K content. Consoles like the PS4 Pro and Xbox One X tend to upscale from a much lower resolution, like 1440p, in order to achieve a 4K image. (And before you ask: no, we couldn’t find a 1440p projector for gaming; it’s mainly just a PC monitor resolution.) These consoles still offer improvements in 1080p mode, though, with many games getting an increase to a stable 60 FPS where they were stuck at 30-40 FPS before.

For most people and use cases, a 1080p projector should be more than fine. Unless you are consuming a lot of content in true, native 4K, there’s no reason to spend an extra thousand dollars (or ten) on a projector capable of 4K.

The main advantage of a projector over a traditional TV or monitor is in the sheer size of the “screen”. You can use a wall for projection purposes, but ideally, you’ll want to invest in a projection screen for guaranteed image consistency. (Paint color, bumps, or stains on a wall may distort the picture, otherwise.) This allows you to achieve screen sizes that are unheard of for a TV, and in a much less fragile package, at that.

That being said… if you live in a small apartment, a projection setup may be impractical for you. Not only will you need empty wall-space for the projected image, but you’ll also need a fair amount of uninterrupted distance between your projector and the wall. We’ve listed these specs in each of the reviews above, so keep them in mind when making your selection.

Put simply, higher brightness is better when it comes to projectors. This applies especially if you want to watch when it isn’t nighttime, or if you don’t have, say, a dedicated basement to set this all up in. Even in the dark, higher brightness will allow for a brighter, more vivid image.

Similar to brightness, contrast ratio is one of those “higher is better” measurements. Contrast ratio measures the brightest color a system against the lowest. :1 will always be the lowest and reflect the darkest an image can get, while the first number will measure how bright and vivid the image can get.

…in theory, anyway. Manufacturers like to use nonstandard interpretations of contrast ratio to provide an artificially-inflated number, even on the high-end. We’ll point out any egregious examples in that product’s particular review, but rest assured: the contrast ratio on any of these projectors should provide a good experience.

The biggest boon of a high contrast ratio is the ability to depict deeper, darker blacks without a loss in image quality. So if your goal is to watch films or play atmospheric horror games, a higher contrast ratio should lend itself to a better experience, at least in theory.

These are pretty self-explanatory measurements, but they are an important factor to consider. Especially with the high-end 4K projectors, which tend to be much larger and heavier than their 1080p counterparts. Weight will also increase the shipping cost for items that aren’t covered by Prime, which happens on-and-off for projectors of any price range.