The 4TB Seagate Backup Plus Portable Hard Drive is so much more than what it seems – and it already seems like a whole heck of a lot. With a reliable brand that’s been around forever, plus a newly-introduced storage system with higher-than-ever capacities, this is a portable drive you truly won’t want to miss.

If you’re a hard core gamer who needs to expand their storage capacity to edit and store large video files, this might just give you the power that you need. If you’re looking for something truly game-changing, look no further. Is this a drive that we would recommend? Read on below to find out!

Pros and Cons: A Quick Overview

About the 4TB Seagate Backup Plus 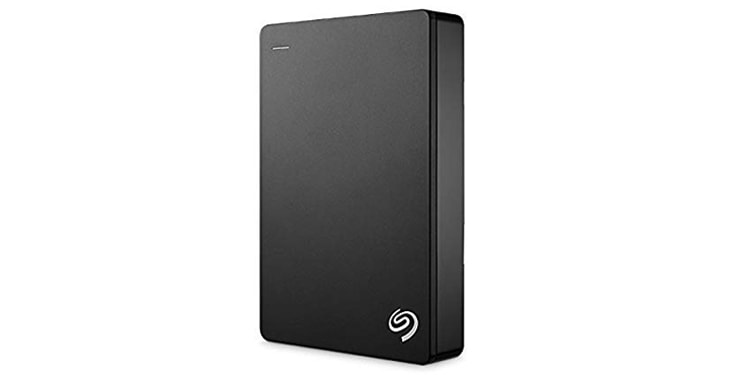 I’ll never forget my mom telling me about her very first job, where she was shown ‘the computer room’. “But mom,” I asked, “what was the computer room?” To which she replied, a room that literally housed one computer. That was way back in the 60s and trying to imagine not having a laptop the size of an A4 book now is impossible, let alone a portable hard drive, the size of a mobile phone, that has a 4TB capacity. Back then, it took an entire room to store a miniscule amount of data, which was often kept in storage and only shared within the confines of the company or the building. Thinking about how far we’ve progressed, and how that same kind of storage capacity can now fit on a microscopic chip, is quite impressive.

It’s only been a recent development, as in the last two years, that if you needed a portable hard-drive with more than 3TB of capacity, you would have to buy something along the lines of the Seagate Backup Plus fast, which combined two 2TB hard disks, using one chassis, resulting in a 4TB portable hard drive. While an ingenious design, this particular hard drive was a little chunky for some, detracting from the portable part. Not to mention it wasn’t always worth the dip in affordability for most people. But now, the Seagate 4TB Backup Plus Portable Drive Hard Drive has been released, helping you say good-bye to the old Seagate Backup and difficult compatibility issues. Now, it’s easier than ever to add more storage to your repertoire. Not to mention, the performance capabilities won’t break your computer. 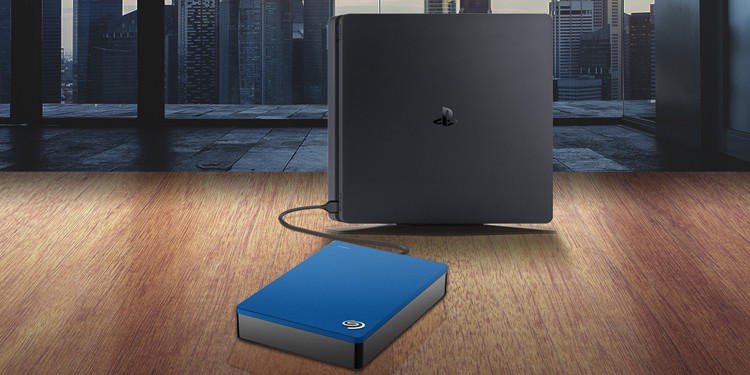 The first thing we want to point out about the Seagate 4TB Backup Plus Portable Drive Hard Drive is that it costs almost half as much as the Seagate Backup Plus per gigabyte. That means that even if you are just looking for an external hard drive to use for basic backups and plenty of storage room, it’s still the top choice.

The Seagate Backup Plus is a long-overdue portable hard drive, with 4TB of storage capacity in one body, which means it’s about 10% slimmer and 20% lighter than the Seagate Plus Fast. Besides the size, the 4TB is ideal for most people because it combines price, speed, and portability. While it’s hard to imagine how anyone can fill up 4TB so fast, the hardcore gamer understands very well what it’s like to run out of space and require more room on the hard drive.

After a lot of research, asking around and making use of our review panel, we found the 4TB Backup Plus, which is available in black, red, blue and silver, to be the most cost-effective in comparison with competitors, and while no hard drive is 100% failure-proof, the 4TB, with thousands of sales each month, has a very low failure rate, of around 2.8% annually. This makes it the most reliable portable drive on the market, and certainly a must-have if you are a PC gamer who needs to back up and store large files.

Seriously, this new Seagate model offers a new kind of backup that is rare for the average consumer market. The Seagate 4TB Backup Plus is suited to anyone looking to back up their data, and quite frankly, that should be everyone. Whether you’re a business owner, an IT technician, a pro gamer, or just someone who is super avid about having great backup options, you truly need a device like this. You don’t want to risk losing your data and wishing you had invested in this 4TB drive sooner.

But what truly sets it apart from its competitors is its software. It is possibly the most comprehensive software around and allows you to save everything locally, and in the cloud, as well as your images, videos, and even your mobile devices. That means you are experiencing simultaneous storage, helping you to have your files in multiple locations at once. There’s nothing wrong with doubling up on your security and safety features!

No bells and whistles, just backup

If you’re looking for a portable hard drive that’s going to get your heart racing faster because of its looks, then Seagate’s 4TB Backup Plus isn’t what you’re after. It may not look like the fanciest or prettiest portable drive on the market, but that’s because its creators spend all of their time focusing on top performance, quality, and efficiency, rather than giving it a pretty cover. It does however come with a black satin finish on the lid, and a disk activity light that lets you know when it’s working. It’s engraved with Seagate’s logo and is based with panel molding. It weighs about 8.6 ounces total, and measures 0.8” x 3.1” x 4.5”, a small and conveniently-sized hard drive.

Simplicity is what it’s all about, with speed, storage, and reliability being the hard drive’s most important, and sellable, features. We also like that there’s a backup feature that takes about 10 – 15 minutes to install but saves you loads of time (and stress) down the line, sending files to the hard drive and encrypted cloud, automatically, without you having to remember to do it. While any kind of 10-15 minute process seems like it’s in the Stone Age now, we promise you it’s all completely worth it. You can go through this process now and you’ll forever have a reliable backup option that will save you from losing your files down the line.

Not to mention it comes with a micro-USB 3.0 port on the side, as well as a Thunderbolt adapter capacity with the USM connector. Although USM is no longer in use, there may still be times where a connectivity such as this is needed. 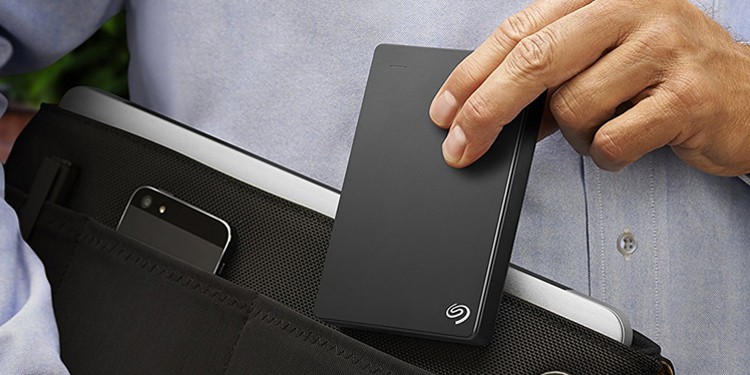 The 4TB Seagate Backup Plus Portable Drive Hard Drive has several advantages over other models of its kind. The biggest feature that we noticed was the fact that it beats the Backup Plus Fast, the Toshiba Canvio Connect II, and the Western Digital My Passport Ultra in terms of performance and speed. After a simple drag and drop test, the 4TB Seagate Backup Plus Portable Hard Drive only took 12 seconds, which is currently the fastest you can go with USB 3.0 drives. The other drives mentioned took 13 seconds or more to complete the same task.

In terms of pricing, this one has a big advantage too. It is half of what the Seagate Backup Plus Fast costs, and even less still of what the Western Digital My Passport Ultra costs. Plus, the Western Digital My Passport Ultra is only 2TB for the price. The capacity and affordability of the Backup Plus is unmatched, and quite unheard of until now. It’s easy to see how this drive has quickly become the favorite among people such as our review panel, professional reviewers, and most hard core gamers.

Gamers have sometimes had a hard time choosing to go with portable drives in the past, but with the major accessibility and backup frequency of something like the 4TB Seagate Backup Plus Portable Drive Hard Drive, it’s easy to see how using portable drives is become a much more mainstream option. Plus, with synchronized cloud storage, it can even be made to secure your files even better.

Of course, as with any products, there are a few drawbacks that should be mentioned. This typically doesn’t deter users from pursuing it anyway, but they are worth mentioning as they may affect you and what you are specifically after on the portable hard drive market.

The first thing we noticed is that it isn’t always faster than the Seagate Backup Plus Fast when it comes to some benchmark tests, but that is more than okay. It is still way more affordable than the aforementioned model, making it a worthwhile purchase in almost every single situation unless you are literally just looking for something to be a scratch disk.

Next, while it’s definitely not a deal breaker, and more of a ‘would be nice to have’, the Seagate 4TB Backup Plus doesn’t include hardware encryption to keep your data safe. We’re not sure if it’s not a feature to keep costs down, or because there are encryption tools already available like VeraCrypt (Windows/OS X/Linux), AxCrypt (Windows), BitLocker (Windows), GNU Privacy Guard (Windows/OS X/Linux) and 7-Zip (Windows/OS X/Linux). Again it isn’t a deal breaker, since it’s easy to invest in third-party encryption services on your own, but it would be nice if this were included to make it on par with some of its competing models on the market today. 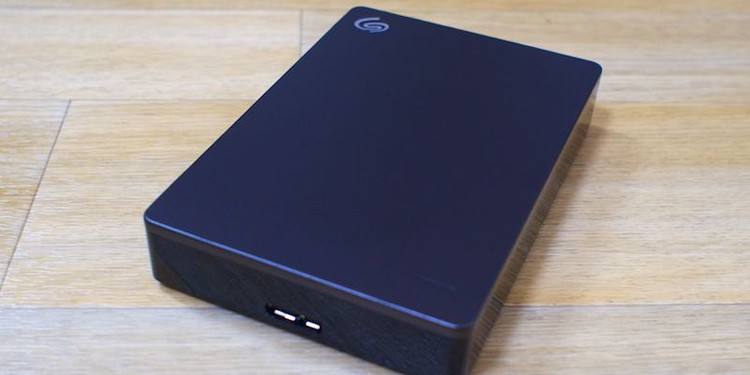 When it comes to portable hard drives the Backup Plus is sold with 200GB of OneDrive storage, which is valid for two years. You are also able to connect the hard drive to Lyve, an app that pulls all your photos and videos together, organizes them in the cloud and lets you manage your videos and photos like a pro. What a great way to incorporate mobile devices to allow you to access and view your files at any time, even when you don’t have direct access to the portable drive itself.  If you’re on various social media and sharing platforms, you’ll appreciate the added connectivity for Dropbox and Google Drive, as well extra backup for Flickr and YouTube.

Something else we like is that it doesn’t discriminate – it’s easy to use on your PC or Mac without having to reformat anything. It’s as simple as installing NTFS drivers on your Mac. This is a nice breath of fresh air for Mac users, who historically have had a very hard time finding a powerful and compatible drive that can work with them. The needs of a Mac user are sometimes more specific than that of a PC user, making it even nicer that this Seagate model is built to be available for all. This can truly help you take your PC gaming to the next level.

It is undoubtedly one of the largest capacity portable hard drives available, and while there is room for improvement, it’s still a far more affordable way of storing your files locally rather than using cloud-based services or buying a NAS (Network Attached Storage) unit. While local file sharing and storage is sometimes seen as an outdated method, it is still very much required in some gaming, industry, and professional business environments, making the 4TB Seagate Backup Plus Portable Drive Hard Drive more relevant than ever.

For us, our review panel, and the thousands of 4TB Seagate Backup Plus Portable Drive Hard Drive users, it has been and will be for some time to come, the top choice for portable external hard drives. If you need more bang for your buck, reliable storage, and extremely fast drag and drop times, this is the right drive for you.