Gamescom is in full effect on the cusp of Opening Night Live, which is slated for kickoff at 11 AM PT and 2 PM ET later today, yet ASUS couldn’t wait to debut its brand new gaming router: the ROG Rapture GT-AXE16000.

The ROG Rapture GT-AXE16000 is the world’s very first quad-band WiFi 6E gaming router, which was initially reported by The Verge earlier this Jan. 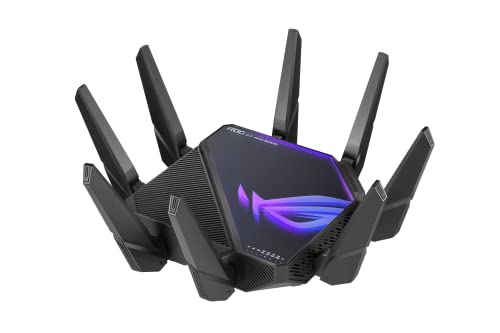 Although known primarily for its suite of gaming monitors and motherboards, the firm is aiming to bolster its decade-long history in router manufacturing through a concept wholly original.

It also sports multiple levels of increased range capabilities, made possible through the exclusive ASUS RangeBoost Plus technology, in addition to alleviating the stress of potential radiation exposure via ASUS’ so-called RF Safe integration.

The IO on the latest ASUS gaming router will likewise extend the gamut of supported devices, including a 2.5 Gbps WAN port with load balancing and link aggregation support, dual 10 Gbps LAN ports, and even an additional four 1 Gbps LAN ports.

ASUS’ ROG Rapture GT-AXE16000 leverages a new 6 GHz WiFi band, which will be utilized primarily by WiFi 6E compatible devices. This is intended to allow older devices to run on a different bandwidth so that newer ones aren’t constrained by the different frequencies.

The issue with this, though, is that very few products with WiFi 6E exist at the moment. Such phones with WiFi 6E include the ASUS ROG Phone 5, ASUS ZenFone 8, Google Pixel 6 and Pixel 6 Pro, Samsung Galaxy S22 Ultra and S22 Plus, as well as the Xiaomi Mi 11 and Mi 11 Ultra.

Still, Asus is making massive strides in building out its router lineup, ensuring that gamers get the best possible connections across all devices.

The company has yet to announce the full availability of the ROG Rapture GT-AXE16000, but consumers shouldn’t have to wait too long as Asus did give a Q4 launch window for the device.

The best Gaming Routers in 2022

How to Reset ASUS Router

The best Gaming Routers in 2022

How to Reset ASUS Router