Building a PC on a budget that’s also a console competitor is no easy feat. However, at PCGuide, we’ve been able to put together builds in the $300, $400 and $500 price ranges to help you on your way to joining the PC master race without breaking the bank. The builds listed below are only a guide, and you can potentially mix and match components from the builds to craft your own perfect budget gaming PC.

For an in-depth look at this build see our full breakdown of our $300 Budget PC Build.

This $300 build is the absolute minimum you’re going to need to be spending to achieve the graphical capability for running the games of today. With this rig, you’re not going to be able to play the latest AAA games at maximum frame rates, but what you will be getting is an entry-level machine that sets you up to start PC gaming on titles like CS: GO and Fortnite. If you’re wanting to play games from older generations, Shogun Total War (2011) for example, it may be a little overkill and you could reduce your budget further. When looking at the components of this one, we’ve opted for functionality as the main driver, disregarding the ‘looks’ somewhat to achieve maximum power at minimum cost. The AMD Ryzen 3 2200G we’ve chosen is a CPU and GPU in one, allowing us to save cost on buying a dedicated graphics card, while also having the capacity to run games at a relatively good level. We also needed a compatible motherboard for this APU so we’ve gone with the ASRock B450M, it has 3rd generation Ryzen CPU support straight out the box and is the cheapest in the B450M range. The 16GB of 3000MHz DDR4 RAM from OLOy and the 240GB SSD from Samsung, you’ll have plenty of fast memory to keep up with multitasking and a solid amount of storage to keep your games on.

For an in-depth look at this build see our full breakdown of our $400 Budget PC Build.

Spending the extra $100 for this gaming PC over the $300 build brings some nice little additions, with increased processing power and graphical capabilities of the Ryzen 5 3400G APU. It comes with Radeon RX Vega 11 graphics on the chip itself so we can save on not buying an external graphics card, and with the 4 core, 8 thread count, it should have enough capacity for intensive gaming. The more trusted brands of MSI and Adata for the motherboard and RAM may increase long term durability and reliability under intense stress which makes them more than worth the extra price. Of course, however, there are limitations due to the low budget nature of the build, so again, we’re sacrificing the RGB aesthetics to maximize its capabilities. If you are looking to add a little color, the $500 could be the budget gaming PC build for you.

For an in-depth look at this build see our full breakdown of our $500 Budget PC Build.

The $500 we’ll be spending on this gaming PC is definitely on the higher end of the ‘budget’ builds. For the first time, we’ve been able to separate the CPU and GPU, allowing for increased overall power and capabilities of the machine. The Ryzen 5 2600 processor is a step up from the 3400G previously used in the $400 build, giving us 6 cores and 12 threads, making this the most powerful CPU in any of the budget builds. Additionally, with the separate GPU, the graphical capacity has increased dramatically, improving not only frame rates but the settings and resolutions also. We’ve made RAM improvements too with the Corsair Vengeance LPX 3600MHZ. This improved memory speed is the match we need for the Ryzen CPU. As well as all these upgrades over the lower-priced builds, we’ve been able to squeeze a little RGB in with the AeroCool Cyclon case, finishing off this gaming PC nicely.

How to choose a power supply

There are a lot of confusing terms when it comes to buying the right power supply for your PC; What wattage do I need? What is an efficiency rating? What do bronze, silver and gold ratings mean? So on and so forth. Without over complicating this, we recommend almost disregarding any power supply that doesn’t have a good efficiency rating. This is because if you choose an extremely cheap supply that doesn’t have that good efficiency rating, it is a lot more likely to fail, leaving you needing to purchase another just to make your PC come alive. Bronze, silver, and gold ratings are an added extra that gives you better efficiencies at different loads, with bronze being the worst and gold is the best. When we think about wattage, things get a little more convoluted, you need to look at all the other components and almost calculate the combined power required. The general rule is to look at how much wattage is required from your graphics card and go from there. You’re looking at between 500w and 650w needed for most builds, but using lower/higher-powered components will sway this, so get your calculator out and start adding.

How to choose compatible CPUs and Motherboards

To ensure you’re choosing a CPU that’s compatible with your motherboard, you need to first choose which brand of CPU you’re going for; AMD or Intel as all motherboards support one brand and not the other. Once that’s been done, choose the processor. Let’s say you’re looking at an AMD Ryzen 5 3600, this is a 3rd generation Ryzen CPU so you’re going to have to choose a motherboard that supports that. It is a very common mistake choosing a motherboard that doesn’t support your generation, so check that product description to make sure it does.

The short answer is yes. You need enough memory speed to match your processor i.e. the Ryzen 5 3600 performs best with 3000 MHz. If you were to have lower speeds than what is optimal for your CPU, then you’re going to be looking at worse overall PC performance.

Why choose an SSD over an HDD?

You do get a lot more storage for your money choosing a traditional hard drive over a solid-state drive but what you’re not getting is the speeds. The speed increase from an SSD compared to an HDD can be between 5 and 20 times, making it almost a necessity for playing today’s games. You could, however, add an HDD as a second drive for storing all of your documents and downloads on due to that higher storage capacity and overall reliability.

As you can see from the three showcased budget gaming PC builds, you are able to achieve some great results from such low priced components. If this was five years ago, these builds wouldn’t have been possible, costing above and beyond for a lackluster machine. Even though you can opt for the $300 and $400 options, it is the $500 range where you truly see a marked difference. With that budget, you’re able to use a dedicated GPU that far outweighs its APU counterparts and gives you fantastic gaming performance. If we had to choose we’d go for the $500 (if your budget can stretch far) as you’re going to be getting a better gaming experience and not have to worry about potentially switching components a year later to try and play some more of the visually demanding titles. 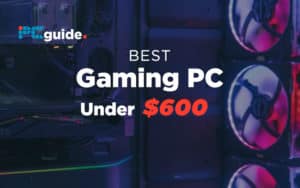 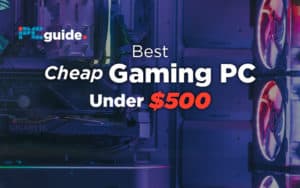 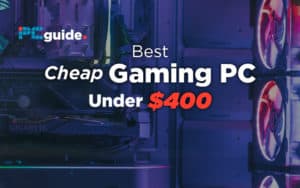 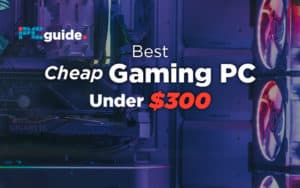