Which RTX 2070 Super to buy? Here are our top picks

After we’ve covered our top five picks, each with their own mini RTX 2070 Super review, we’re going to proceed to the need-to-know information. This includes the difference between RTX 2070 and RTX 2070 Super, as well as performance information and our advice for picking the right version of the card for your needs.

Whether you want the cheapest 2070 Super on the market or the absolute best, we have you covered! It’s time to find the best RTX 2070 Super.

(Author’s note: some of the Amazon pages will have low review scores in response to price-gouging. This has been alleviated since then, though. The RTX 2070 Super MSRP is $499, but the custom designs listed below usually cost a bit more.)

The card with the lowest RTX 2070 Super price 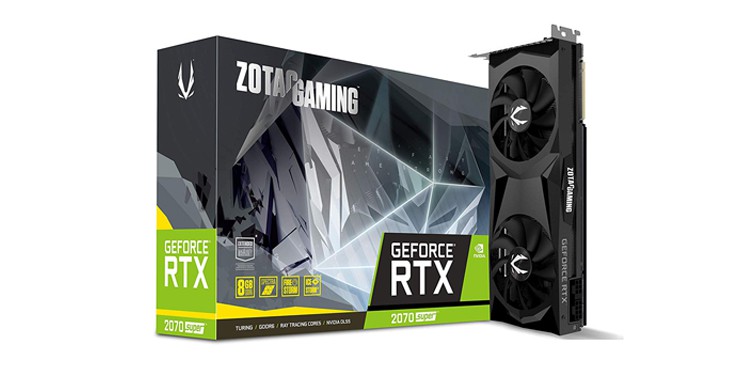 Let’s say you want the cheapest RTX 2070 Super there is, and you don’t really care about VirtualLink support. If that sounds like you, then the ZOTAC Gaming Twin Fan RTX 2070 Super is a great pick!

At the time of writing, this is one of the cheapest RTX 2070 Supers available on Amazon. It comes from a reputable manufacturer, it’s not too small or too big, and it has a good enough cooling system to push it beyond its meager factory OC. All-in-all, you can’t really complain for the price point.

Unless you don’t want to overclock, in which case the low factory OC might be a problem. Or if you’re a VR fanatic, in which case not having a VirtualLink USB-C port will make setting up your VR headset just a little bit more of a pain in the rear.

As long as these issues don’t bother you, we wholeheartedly recommend this card. If they do, continue on! We have four more cards for you to look at. 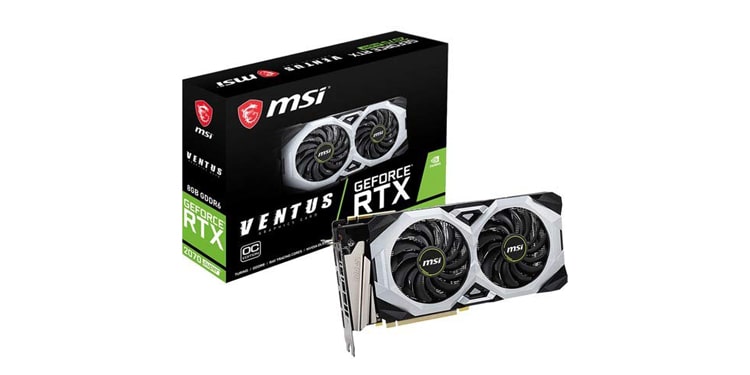 This is the smallest RTX 2070 Super, and also one of the cheaper ones available on the market. For your money, you get a decent factory OC, but you could definitely push that overclock farther with the strong Ventus cooling system on this card.

While this card isn’t quite as “mini” as, say, a GTX 1650, it’s still shorter than most, if not all other RTX 2070 Supers available at the time of writing. Plus, it has a unique white cooler design and isn’t much more expensive than base MSRP, which is super nice.

Unfortunately, this one still lacks USB-C support. For VR gamers who don’t want to deal with extra cords, that may be a dealbreaker. 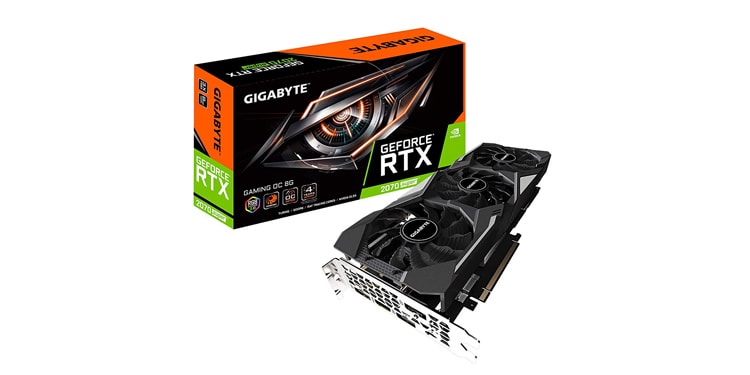 Now we’ve made it to the Gigabyte Windforce OC RTX 2070 Super. This is our pick for the best 2-slot card on this list, though it’s also one of the longest, coming in at a whopping 287 mm in length.

Don’t worry, though; all that length is being put to good use. You get a triple-fan, dual-slot cooler design, which offers excellent thermal performance. This allows it to boast the second-best factory overclock on this list, with room for plenty more if you’re willing to overclock it yourself.

Plus, this is the first entry on our list that has USB-C support! This will allow users with up-to-date VR headsets to plug only a single cable into their PC, greatly alleviating the number of cords and amount of hassle required for a PC VR gaming setup. 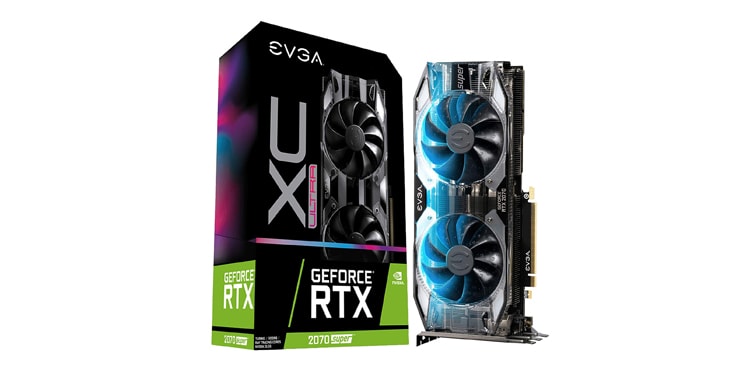 If space inside your PC isn’t a concern, chances are you’re looking for more power. Specifically, cooling power.

If that sounds like you, then the EVGA XC Ultra is a great pick. You get a massive three-slot, dual-fan cooler design, which is sure to outperform the cooling capacity of all the previous cards on this list. You also have the added benefit of a fairly high factory OC, which you can push even higher on your own if you want to make the most of that cooling.

Additionally, you aren’t lacking in extra features here. The transparent cooling shroud offers full RGB lighting, and the card itself offers a USB-C port for VR headsets. This will enable you to more easily set up your PC for the best in VR gaming, which the RTX 2070 Super is more than enough to power.

Unfortunately, there are a few downsides here. For one, this card will come at a higher price than the previous entries on this list. Secondly, it’s also fairly long and fairly thick, which means it’s much less ideal for petite ITX builds or other space-constrained setups. 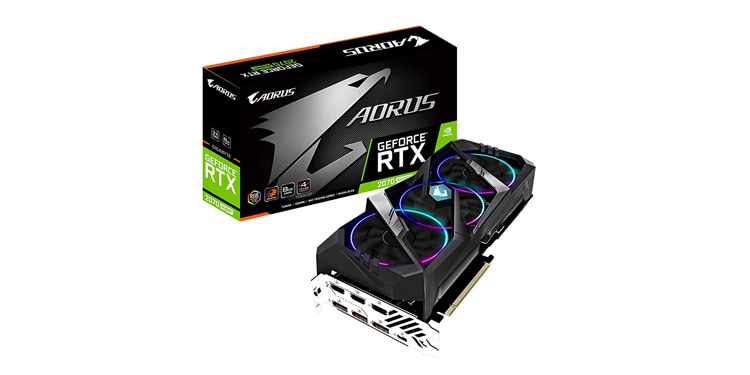 Last but certainly not least is the Gigabyte AORUS RTX 2070 Super, which is our pick for the best overall RTX 2070 Super. Everything is here.

First, the downsides: this will be the most costly 2070 Super, and it is also by far the largest. With a 3-slot cooler design and a 290 mm length, this is the thickest and longest card on this list by a pretty fair margin. However, all of that is for a reason.

Namely, there are triple fans and a massive heatsink taking up all that space, providing the absolute best cooling performance possible for an RTX 2070 Super. This is reflected in its stellar factory OC, which is higher than any other card on this list. All the cooling capacity means you should be able to push it even farther, too, which is great for overclocking enthuasists.

In terms of extras, every box is checked here. Smooth RGB on the fans. USB-C support for VR headsets. Even a few extra HDMI ports, if that’s important to you! If you’re willing to pay extra for it, all the performance, cooling, and features you could want are right here.

Now, we’re going to help you choose the right 2070 Super for your needs and answer any questions you may have about the card. Let’s start with the obvious.

How does it compare to the RTX 2070? Can I get that instead?

Nvidia claims up to a 24% performance improvement when compared to the RTX 2070, but this is a bit exaggerated. In real-world gaming scenarios in the highest-end games, though, these gains are more marginal– typically in the range of 10 or so FPS.

Unlike with the 2060 Super, which trades blows with the original 2070, this card does not leap up a tier and mostly just provides marginal improvements. That isn’t a bad thing, though– especially since it’s actually cheaper than the original 2070 was at launch.

If you’re tempted to just buy an RTX 2070, we have bad news: that option is rapidly disappearing.

Once the current RTX 2070 and RTX 2080 stocks deplete, those cards will be permanently replaced by their Super versions, which each provide small performance boosts. If you do search for an RTX 2070, make sure it costs significantly less than the Super’s $499 MSRP if you want to get a good bang for your money.

(You can also just consider the RTX 2060 Super instead, which is brand new and already up to $100 cheaper.)

How will these cards perform in games?

For native 4K gaming, anywhere from 40-50 FPS can be achieved with high-to-max settings, but this can also be reduced to 30 in the most extreme scenarios. We recommend using resolution scaling and lowering extraneous settings for gaming at 4K with this GPU… and in general.

As far as 1080p gaming and VR goes, these are both scenarios where the RTX 2070 Super boasts more than enough power to succeed. In 1080p, though, you’ve reached the point where you are much more likely to be CPU-bound than GPU-bound, so make sure you have a powerful enough CPU if your goal is high refresh (144 Hz+) gaming.

A note on clock speeds

Each of these cards ship with differing clock speeds based on the factory overclock provided by the manufacturer.

While it’s true that overclocking will increase performance, fundamentally-speaking, these are all the same GPU chip. Don’t expect massive performance gaps between different versions of the RTX 2070 Super based on their factory clocks– the main utility of a high factory OC is saving you the trouble of overclocking the card yourself.

If you want the best experience with minimal tweaking, opt for higher factory OCs. If you’re comfortable with an OC program, though, don’t base your purchasing decision on this metric.

Width and length are the physical dimensions of the card, and will determine whether or not it will actually fit inside your system.

The width of a GPU is measured in PCI Express slots, with 2 being standard for graphics cards. Unless your other slots are occupied or you’re building in a mini ITX case with no airflow beneath the motherboard, you should be fine with even a 3-slot card on your motherboard.

What’s more important is the length, which is measured in millimeters. This covers the longest side of the graphics card and is the most common cause of GPU incompatibility, especially in smaller ITX cases. Be sure to consult your case specs or measure the available space yourself before purchasing a card.

Last but not least, let’s talk the display connectors on the back of your GPU.

The most common one is DisplayPort, which is primarily a PC and monitor technology. You’ll usually get 3 of these with an RTX 2070 Super.

The next most-common one is HDMI, which is primarily a TV technology. There will always be at least one of these ports on an RTX 2070 Super, but usually no more than that. The advantage of DisplayPort over HDMI would be its superior support for PC-oriented features, like FreeSync and G-Sync.

You may also see a USB-C connector. This is for VirtualLink and VR headset compatibility, enabling a VR setup with much fewer troublesome cords to deal with.